By Jay Floyd September 09, 2011
After both series openers were washed out by rain on Wednesday night, the Eastern League and International League playoffs, each of which featured a Phillies affiliate, got started on Thursday.

In the opener of the Triple-A International League divisional series, the Lehigh Valley IronPigs, playing host to the Pawtucket Red Sox at Allentown's Coca Cola Park, took command of the best-of-five series with a few big bombs and some solid pitching.

Bush, a 31-year-old right-hander who recorded a win in the playoffs against the Phillies in 2008 for Milwaukee, was released by Texas in July after posting a 5.79 ERA through 17 appearances. The Phillies signed Bush and added him to the Lehigh Valley roster in August. For Bush, the win was his second since joining the IronPigs.

Lehigh Valley took the lead in the bottom of the 1st inning, when Rich Thompson scored on a groundout by Kevin Frandsen. Kratz's homer to left in the 2nd inning put the 'Pigs up 2-0. Another solo shot by Brandon Moss in the 4th inning put Lehigh Valley up by 3.

The Paw Sox got on the board in the 6th, when 1st baseman Lars Anderson went deep for a solo homerun off of Bush. However, Galvis clapped back in the 7th inning, slugging his first Triple-A homer off of former Phillie Brandon Duckworth, who came on in relief for Pawtucket, putting Lehigh Valley up 4-1. 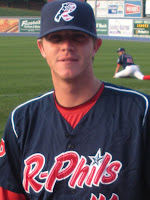 IronPigs reliever Phillippe Aumont allowed an RBI ground out in the 8th to bring Pawtucket within 2 runs, but Justin De Fratus came on to pitch the 9th and tossed a 1-2-3 frame to record the save and clinch the 'Pigs' first ever postseason victory.

"It's great to be a part of the first playoff win and I'm sure everybody in this clubhouse feels the same way," De Fratus said after the landmark triumph. "Nobody is getting too amped up just yet. It's definitely good to get the first one, but two more games need to be won, so we're gonna enjoy it tonight, but when we get here tomorrow, it's time to get number two."

The IronPigs, who are in their fourth year of existence, will get that opportunity to lock up that second playoff win when the two clubs go back at it on Friday night in Allentown, before the series moves to Pawtucket for the duration.

In Manchester, NH, the Double-A EL divisional series got underway, and saw Reading's Tyler Cloyd pitch very well, holding the New Hampshire Fisher Cats (Toronto) to just 2 earned runs, while striking out 8 in 6 2/3 innings. However, the 24-year-old Cloyd was out-dueled by right-hander Chad Jenkins, who threw 7 scoreless innings and struck out 9 R-Phils batters.

Two former Phillies prospects made their impact on the series in the opening contest, as Travis d'Arnaud and Anthony Gose each went 2-for-4. d'Arnaud drove in Gose to give the Fisher Cats a lead that they would never relinquish in the opening frame. d'Arnaud was among the players sent to Toronto for Roy Halladay in 2009 and Gose was sent to Toronto by Houston following the Roy Oswalt trade of 2010.

Third baseman Mark Sobolewski capped the scoring with a solo homer in the 7th inning off of Cloyd.

Game 2 of the best-of-five series is scheduled for Friday night in Manchester, with the series headed to Reading's FirstEnergy Stadium for game 3. Game 4 (if necessary) will also be played in Reading, while a deciding game 5 would be played back in NH.

In other minors news, Zach Collier, who played with the Class A Lakewood BlueClaws this season, was suspended 50 games after reportedly testing positive for amphetamines. The news came on Thursday, which was Collier's 21st birthday.

The lefty hitting Collier was set to play with the Phillies' instructional league team beginning next week, but it is unclear if he will still participate there, although his suspension is set to begin opening day 2012.