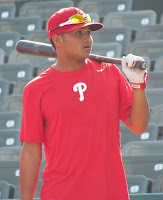 The Phillies announced on Wednesday that shortstop Freddy Galvis and right-handed pitcher Trevor May were named the winners of the annual Paul Owens Award for the top player and pitcher, respectively, in the team's minor league system for 2011.

Galvis, a 21-year-old switch-hitter, posted a combined .278 average with a career high 8 home runs, 43 RBI, 23 stolen bases and 78 runs in 137 games between Double A Reading and Triple A Lehigh Valley this year. The native of Venezuela was selected as an Eastern League All-Star prior to being promoted to Lehigh Valley at the start of August. Galvis was signed as an amateur free agent by the Phillies in 2006 at the age of 16. 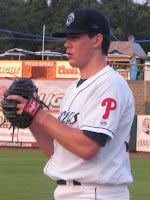 May, a 21-year-old from Washington, posted strong numbers all season long for the Class A Advanced Clearwater Threshers. In 27 starts, May went 10-8 with a 3.63 ERA, while striking out a Florida State League leading 208 batters in 151 1/3 innings, and holding opposing hitters to a .221 average. The Phillies' 4th round draft pick from 2008 earned the win in the 50th annual FSL All-Star Game at Bright House Field this year, was twice named FSL Pitcher of the Week and earned Phillies Minor League Pitcher of the Month honors for June. In a recent survey of media members and team personnel conducted by The Reading Eagle, May was ranked as the top prospect in the Phillies developmental system.

The pair will be presented with their awards during a pre-game ceremony on Sunday, September 18, when the Phillies host the St. Louis Cardinals in a nationally televised match up at Citizens Bank Park.

In a press release from the Phillies, Assistant General Manager in charge of player personnel Benny Looper stated, "We’re very happy with the seasons that both Freddy and Trevor had. At only 21 years old, Freddy rose to the challenge of Triple A ball and improved his batting average. His defense was right where we expected it to be and his instincts on a baseball field are tremendous for a player of his age. Trevor’s strikeout totals in the Florida State League were very indicative of his progression in our minor league system. Both young men have very bright futures."

ken45 said…
How close to you think Julio Rodriguez was to winning the award? Who would you have selected for the pitcher award?
September 10, 2011 at 2:51 AM

Jay Floyd said…
Hi, Ken. Thanks for checking in.

That's such a tough call...great arguments for BOTH May and Julio. Rodriguez had better ERA, better batting average against and more wins. Trevor had bigger K totals, less HR allowed and completed 3 games compared to Julio's 0.

Either guy is deserving, but perhaps May had the edge, as he is the bigger name in the Phils' developmental system right now.
September 12, 2011 at 11:38 AM