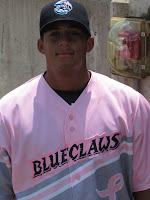 Lefty pitcher Mario Hollands had a roller coaster of a season in 2011 with the Phillies Class A affiliate the Lakewood BlueClaws. Hollands, who had a strong showing in spring training to earn the spot as the 'Claws' opening day starter in April, was removed from the pitching rotation after a rough 7 start stretch in which the 6-foot-5-inch 210-pounder posted a 6.95 ERA.

Hollands, who was a 10th round pick by the Phillies in the 2010 amateur draft, expressed a preference for working out of the bullpen following the success he had appearing in relief.

"I don't mind doing either one, but since I made the move, I kind of enjoy the bullpen a little bit more," Hollands said. "I get to pitch more often and I like that a little more. It seems a lot easier, just because you can go in there for one or two innings, and just blow it all out, then you can come out there a day or two later and do the same thing. My success out of the bullpen is only encouraging for the years to come."

The native of El Cerrito, California made his professional debut with the short-season Williamsport Crosscutters in 2010, posting a 4-4 record with a 4.57 ERA in 14 starts. Since then he has dropped a curveball from his repertoire and worked closely with Lakewood pitching coach Steve Schrenk to improve his slider and his cutter. Those pitches compliment Hollands' two-seam fastball, which saw a jump upward in speed from the high 80's he regularly threw early in the season once he made some mechanical adjustments.

"Schrenky and I tinkered with a bunch of little stuff and it's all helped in some way. Everything from (lowering) my arm down a little to where it was last year, little things that people may not be able to see," Hollands said.

"We wanted to change a few things and that took a while to work on, over the middle of the summer, but I'm still happy with how most of the season went."

While there is no confusing the progress Hollands made in his first full season as a pro, there is one thing about him that does require steady clarification. Hollands, who is of Mexican and black descent, regularly runs into players, umpires and team staffers that have a misguided notion about Hollands' first language. He is often mistaken for being fluent in Spanish.

"A good percentage of umpires and a lot of other Latin players expect me to be fluent in Spanish, but disappointingly I am not," Hollands stated. "It takes umpires and other teams' players a little while to figure that out when I don't answer back in Spanish. And even my teammates (in the Phillies organization), when I meet some of the guys for the first time, they don't think I'm American."

One of Hollands' biggest off-season goals is to work on improving his Spanish in order to make things easier on everyone.

Also on the agenda for Hollands over the winter is a workout routine to stay in shape, as he hopes to climb the developmental ranks next season. He'll do so by working out with the baseball team at UC Santa Barbara, where he is spending time this autumn to complete his education. He'll include swimming and basketball in his training regimen, during the period of about two months when he does not pick up a baseball.

As Hollands trains this off-season, he'll do so with the likes of other professional UC Santa Barbara products like Jesse Meaux, Connor Whalen, Mark Haddow and Greg Davis, as well as Major Leaguer Ryan Spilborghs, another former Gaucho. With all that company, the fall and winter months will surely fly by for Hollands who is already focused on getting back on the mound in meaningful games.

Allen said…
Cool. Sounds like a promising lefty. If he climbs another notch with speed as he moves up, he may be valuable to the Phils in the future.
September 28, 2011 at 12:04 AM