Brandon Moss powered the IronPigs to a 2-0 lead in the best-of-five opening round of the International League playoffs. After trailing the PawSox 1-0 after the top of the 1st inning, Moss, a former Red Sox farm hand, pulled the game even with a solo homer in the bottom of the 2nd.

In the following frame, the 27-year-old Moss gave the 'Pigs a 2-1 lead, driving in Scott Podsednik with a double. Kevin Frandsen attempted to score on the same play, but was gunned down at the plate.

Starting pitcher Ryan Edell, who has been great at Coca Cola Park (5-1, 1.98 ERA in 8 regular season games), put forth a solid effort, allowing 1 run in 5 2/3 innings but did not figure in the decision.

The IronPigs held their lead until righty reliever Phillippe Aumont allowed an RBI double to Daniel Nava in the 8th inning, which marked the second consecutive night that Aumont afforded his opposition a run in 1 inning of work.

The game remained in a deadlock through regulation and headed into extras. After Pawtucket failed to score in the top of the 10th, Moss stepped up once again to put an end to the contest and send put the 'Pigs in total control of the series with an RBI single that brought home Freddy Galvis.

Right-hander Justin De Fratus worked an impressive 2 innings, striking out 5 batters and earning the win. The 23-year-old De Fratus notched a save in Thursday's game 1 victory.

The series returns to Rhode Island on Saturday, with the PawSox needing to win three straight to prevent Lehigh Valley from going to the Governors' Cup finals.


In Manchester, New Hampshire, the R-Phils entered the night down 1-0 in the opening round of the Eastern League playoffs. Reading rode exceptional pitching from right-hander J.C. Ramirez and some explosive bats to a convincing victory that tied the series.

Ramirez, 23, controlled the plate and proved confusing to Fisher Cats batters, who were held without a hit until the 6th inning. Ramirez, who was among a group prospects the Phillies acquired from Seattle for Cliff Lee in 2009, has struggled at times this season, but has shown serious glimpses of domination on occasion as well.

The native of Nicaragua, Ramirez, held New Hampshire scoreless through 6 innings, allowing the lone hit and 2 walks while striking out 6 batters to earn the win. 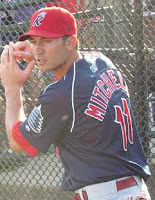 The offense was led by center fielder Derrick Mitchell, who recorded a double and a triple while driving in 5 runs for the winners. Mitchell, a 23rd round draft pick in 2008 by the Phillies, cooled down considerably in the second half of the season (.220 batting average after All-Star break, compared to a .288 mark before the break), but has picked the right time to heat back up.

A bases loaded triple in the third inning by the 24-year-old Mitchell put the R-Phils up 6-0.

Mitchell's 3-for-5 night fell a homerun shy of the cycle. Shortstop Ozzie Chavez and catcher Tuffy Gosewisch pitched in with three safeties each as well.

Already up 7-0 heading into the 7th inning, Reading added 4 more runs as Matt Rizzotti drove in a run on a bases loaded ground out, Mitchell plated two more with a double and Gosewisch doubled to drive in Mitchell.

New Hampshire managed to tag Reading relievers Chris Kissock and Derrick Loop for 1 run each, however the Toronto affiliate was unable to overcome their massive deficit and fell, by an 11-2 final score. The win for the R-Phils was their first postseason victory in 10 years and one day.

All tied up, the best-of-five series moves to Reading's FirstEnergy Stadium for Game 3 on Saturday night at 7:05. Game 4 is set for 6:05 PM, Sunday.