By Jay Floyd September 27, 2011
With the Phillies' 7-1 victory over the Braves on Tuesday night, milestones were reached. Not only did the Phillies tie their single season wins record by matching the 1976 and 1977 teams that had 101 wins, the win also tied Charlie Manuel with Gene Mauch on the all-time managerial wins list in team history with 645.

Manuel began managing the Phillies in 2005 and has helped the franchise take command of a division that had previously been dominated by Atlanta and New York. Manuel reached the landmark win total in two fewer seasons than Mauch needed. 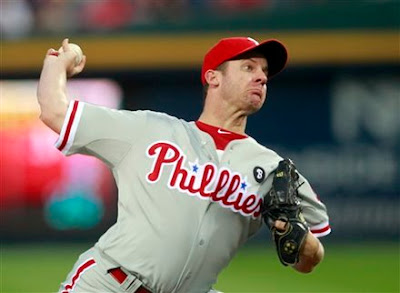 The 6 IP/0 run outing by the veteran Oswalt completed a foursome of excellent showings by the projected Phillies playoff rotation in their final starts of the regular season. As pointed out by Phillies.com's Todd Zolecki, the group of Roy Halladay,Cliff Lee, Cole Hamels and Oswalt had strong postseason tune ups, allowing just 3 earned runs in 25 innings (1.08 ERA).

Bastardo, a 26-year-old native of the Dominican Republic, had posted a 22.07 ERA in his last 7 appearances. Bastardo's effort on Tuesday marked his first 1-2-3 inning of work since September 2nd.