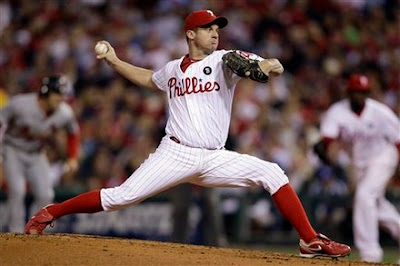 Behind 7 dominant innings from starting pitcher Roy Oswalt, the Phillies defeated the Cardinals, by a score of 9-2 on Saturday, to clinch their fifth National League East division championship in five years. In front of 45,470 fans at Philadelphia's Citizens Bank Park, the righty veteran Oswalt earned his 8th win of the season and looked dominant, while allowing no runs and striking out 7 batters.

Thanks to the strong effort from Oswalt, the Phillies took a 3-0 lead into the 8th inning. Mike Stutes came on in relief and, after getting the first two outs of the inning on 7 pitches, gave up hits to four straight batters, allowing the Cardinals to cut the Phils' lead down to one run, before Brad Lidge came on to squash the visitors' rally.

The Phillies, determined to lock down the division crown in the franchise-best 150th game of the season, put an exclamation point on the clincher. Batting around, the Phillies plated 6 runners, including a grand slam by Raul Ibanez to complete the scoring. 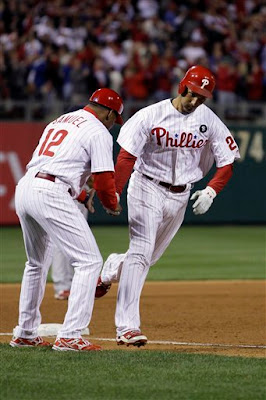 After Ryan Madson threw a scoreless 9th inning the celebration commenced. As the team did last year, when they waited for Roy Halladay, Brian Schneider and Mike Sweeney -three veterans who had never won a division title- to open the first bottles of champagne, this time the Phillies made sure Hunter Pence got to pop things off. 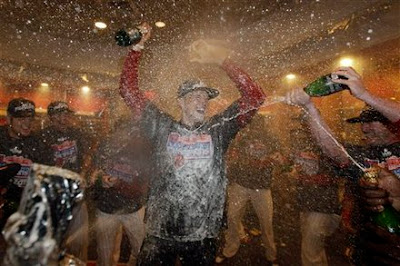 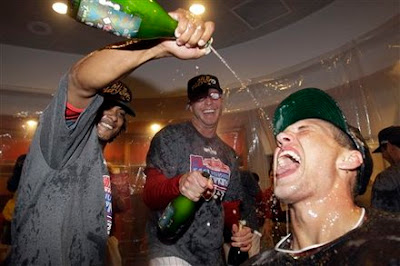 The next step, of course, is the postseason. In the 12 games until then, the Phillies will likely rest many players and utilize some of their talented youngsters that have filled in throughout the year and/or have joined the team after a solid run in the minor league playoffs with the Triple-A IronPigs.

The capacity crowd marked the 198th consecutive sellout at CBP.

Anonymous said…
hi to all misterballz.blogspot.comers this is my first post and thought i would say a big hello to yous -
thanks speak soon
gazza
November 25, 2011 at 9:26 AM