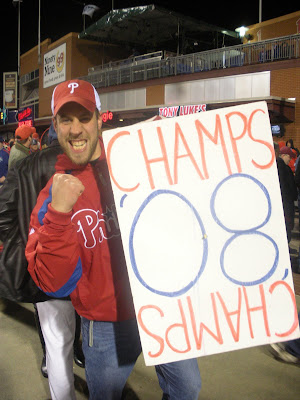 The Philadelphia Phillies won 24 of their last 30 games and became WORLD CHAMPIONS by defeating the Tampa Bay Rays 4-1 in the 2008 World Series.

I have heard Phillies Phans, at the ball park and on TV, say that they don't know what to do. This is what happens when a full generation of Philadelphia sports phans win their very first major sports championship.

Cole Hamels was named Most Valuable Player of the World Series. That honor is added to his NLCS MVP hardware. Hamels narrowly missed becoming the first pitcher ever to win 5 starts in a single post season.

Speaking of "Lights Out" Lidge, he ended the season perfect in save opportunities. 48 successful saves converted for the phirst year Phillie. Tremendous.

Live it up, Phillies phans. This is what our Philadelphia phandom is all about. It is a brotherhood. It is what bonds us. It is what makes us who we are. Cheers and congratulations to all of you.