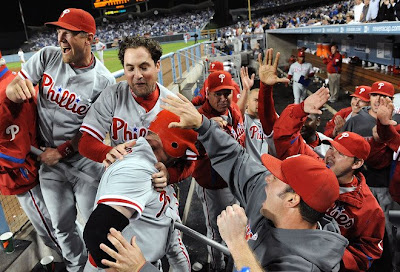 In the fourth game of the NLCS, the Phillies came from behind in the 8th inning with two 2-run homeruns to take the lead and hold on for a huge victory. Tonight's heroes were Matt Stairs and Shane Victorino again. Shane set a new Phillies record for RBI in one post season with 11. Matt Stairs said in a post game interview that he's made a career of coming off the bench with the approach of swinging for the fences. Stairs has 13 career regular season pinch hit homers and a .938 OPS as a pinch hitter. Shane-o's 2-run homer tied the game, and Stairs' 2-run monster shot put the Phils ahead for good.

Matt Stairs had the at bat of his life in this game. Phillies phans will love this guy phorever, based on this one moment. This go ahead homerun was Matt Stairs' Aaron-Rowand-busting-his-face-on-the-outfield-wall moment.

A third hero in game 4 was Chase Utley. Chase continues to contribute at the plate and made a very key defensive play in the 7th inning to hold the Phillies deficit to 2 runs. Utley made a hot grab on a Russell Martin liner, with the bases loaded, and turned it into a double play by diving, mit first, into the second base bag ahead of the runner. Through four games of this National League Championship Series, Utley's on-base percentage is .611.

Credit should go to Charlie Manuel for flipping Jayson Werth and Shane Victorino in the lineup. Manuel looks at match ups and uses his (large) gut to make these decisions. Werth and Shane both proved helpful in game 4's offensive performance. Manuel did a lineup switch with the same two guys for game 2 of the NLDS. Victorino hit a huge homer in that game also. You might recall...it was a grand slam off CC Sabathia.

The Phillies are now one win away from the World Series. With their ace, Cole Hamels, on the mound on Wednesday night, the Phillies can clinch that World Series berth. Hamels will face off against Dodgers hurler Chad Billingsley.

cdcool62 said…
"Manuel looks at match ups and uses his (large) gut to make these decisions."