2 wins away from The Series...Destiny? 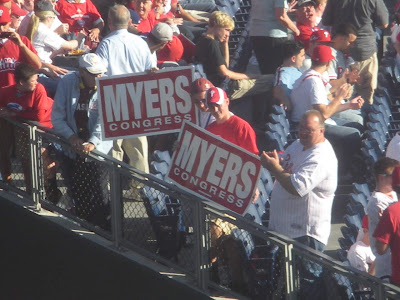 Brett Myers is having a remarkable post season. 3 hits at the plate in game 2 of the NLCS is historic. He's the very first pitcher ever to collect 3 hits in an LCS game. Brett has as many hits in two post season games as he did the entire 2008 season. He's also 2-0 on the mound this post season, and that's pretty nice also. That one TV sports network referring to Brett as "the Hit Man" might not be the greatest idea, based on his past, but we'll let it slide since he's the freaking man today and that one TV sports network usually spews garbage anyway, so we expect no less.

The Phillies learned prior to the game that manager Charlie Manuel's mother had passed away. Brad Lidge and the rest of the team wanted so much to win for Charlie. The team then learned, after the game, that outfielder Shane Victorino's grandmother had died. Shane's father kept the news from Shane until after the game. Victorino updated his blog, on mlblogs.com, and confirmed that he is not expected to miss a game in this series. He says his grandmother would want it that way, and Shane thinks Charlie's mom would feel the same. Victorino believes the deceased family members are watching over the Phillies now, and will help them win.

With this news, the similarities between this team and those 1996 Yankees are building up. In '96, Yankee Paul O'neil's mother passed away down the stretch, and manager Joe Torre's brother was in the hospital with a very serious ailment. That was a team that was destined for great things with intense determination. The 1996 Yankees went on to rally behind their families and win the World Series.

I'd like to toss the word destiny out there for you all to sip and swish. Let's hope it can be that.


Briefly back to Lidge...he continues to be PERFECT in save opportunities this year. He also continues to mix in some threats to that perfect streak, at times. Here's to Brad Lidge everybody!

The Phillies' likability phactor is increasing by the day. The national stage, the dynamic performances, the history, the family aspects...this could be Phillies Nation before we know it.