The Phillies win the pennant! 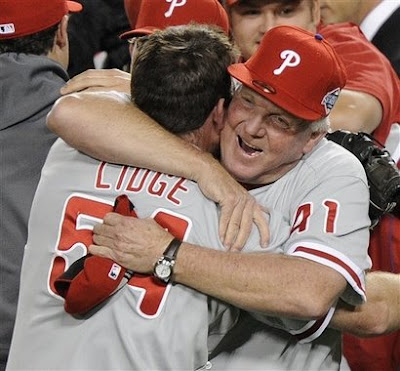 So many possible headlines after this win. "Cole-ywood." "Phall Classic." A "Cole Train" reference. "I'll name my first born Charlie...even if it's a girl." I took the easy route.

Who remembers Jimmy Rollins predicting that the Phillies would win 100 games this year? Well, with this NLCS victory, the Phillies are now 1 win short of 100 wins this year. Jimmy leads the Phillies in all time lead off homeruns in the regular season. In addition to that, all 3 of Jimmy's career post season homeruns are of the leadoff persuasion.

Dodger shortstop, Rafael Furcal, who is usually tight on defense, made three errors in the 5th inning of game 5. This really took any wind out of the Dodgers' sails and put the Phillies up 5-0 at that point. There was no coming back for LA, as they lost 5-1.

Cole Hamels is your NLCS most valuable player. Through 3 post season starts, Cole has surrendered just 3 earned runs in 22 innings pitched. That is a 1.23 ERA. Cole will start game 1 of the World Series on Wednesday the 22nd.

Ryan Madson also deserves a lot of credit for having an outstanding post season. Through 7 post season appearances, "Mad Dog" has pitched 9 innings and has only allowed 1 earned run while striking out 6. Madson has really proven to be a solid bridge from the starters to the closer.

As for the World Series, have no phears. In a post game interview, Charlie Manuel congratulated Phillies phans and assured them that, "We gon' do it!"

mark evans said…
Balz! Great note on the clincher. Let it go on the record that yesterday I declared early in the day, that Wednesday the 15th would be known as "Clinch Wednesday". Clearly, I was right, though off a bit on my predicted final score of 5-1. At least I knew where King Cole would take it!

Phillies North reports great pleasure in winning the Pennant, but exudes the same, reserved, calm, mature, expectent vibe that the Phils Clubhouse carried as they said "four more wins and we can celebrate".

Kudos to Gentleman Pat Gillick for acknowledging Fast Eddie Wade for laying the foundation of this soon-to-be legendary ball club.

Anonymous said…
I had tears in my eyes....what a night. And I got to share it with the hubby...perfect! Phils are on fire with no water in sight! This will be the year. Great blog Ballz..you really know how to capture it all in words.