Hamels is my Cole Pilot... 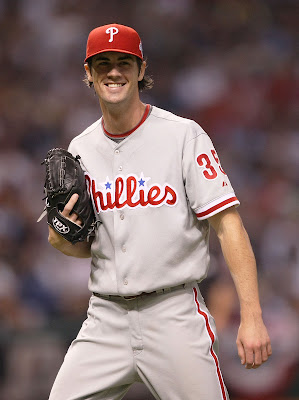 Game WON of the 2008 World Series is in the books. On this night, the Phillies won their 100th game of the year and lead the series, 1-0. There's nothing much better than Cole Hamels putting all the silly cowbell chimers on the HUSH setting, down in Tropicana Field. Hamels now has 5 earned runs allowed in 29 post season innings this year. That is a 1.55 ERA. I really can't think of anything more phun to watch than Cole Hamels these days.


Our Phillies got off to a hot start in the 1st inning when, following a Jayson Werth walk, Chase Utley (AKA- Chutley) hit a blast to deep right field for a homerun. This gave Philadelphia a lead which they would not let up. Utley went on to add another base hit and two steals in his World Series debut.


It just wouldn't be the Phoul Ballz if I didn't toss some negativity at you all. I need to take the time to critique the non-move in the top of the 9th inning where, against a right handed pitcher and with 2 runners on, Charlie Manuel chose to let Eric Bruntlett bat instead of using Matt "the MF'n man" Stairs or Geoff "Don't call me Brett Favre or Randy Wolf" Jenkins, who are both lefties. Bruntlett got out and the Phillies did not get any insurance runs. Brad Lidge came on to work a scoreless 9th inning to stay perfect in save opportunities this year, but I can't help myself to point out that Charlie Manuel did not do everything he could to score runs in this game.


All the Ryan Howard critics out there that point out how the MVP contender strikes out too often, you have a point. I normally argue that statement and say, "an out is an out...who cares how he makes it when he leads the league in homeruns and RBI?!" I can't do that after game 1. Keep in mind that Howard struck out in this game twice with a runner on third base and just one out. We all know that a deep fly ball in that situation results in a run scored. Ground balls score runs on occasion also. An out is not just an out.


With the series lead, why not devote another paragraph to less than positive information? Here is a list of the American League east division teams in order of when they established affiliation with their current cities-
Boston Red Sox (1901)
NY Yankees (1903)
Baltimore Orioles (1954)
Toronto Blue Jays (1977)
Tampa Bay Rays (1997)

And (the Phillies have lost 4 of the 5 World Series they've been to prior to this season) here is a list of the teams that have defeated the Phillies in the World Series, in order. You may notice the similarities...
Boston Red Sox (1915)
NY Yankees (1950)
Baltimore Orioles (1983)
Toronto Blue Jays (1993)
And...the Phillies are currently playing that remaining team from the AL east in the World Series.