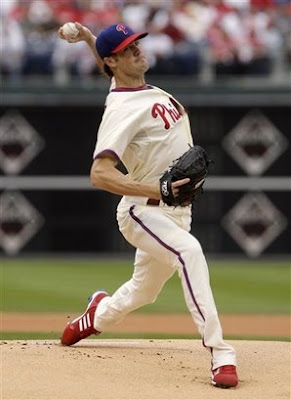 Happy October to all of you. Baseball playoffs are back in Philadelphia. Hip hip, hooray!!

Kole Hamels (yes, it is okay to spell it with a 'K') pitched one hell of a game 1 on Wednesday. 8 innings pitched, 9 strike outs, no runs allowed, 1 walk. As we've grown accustomed, Brad Lidge made the 9th inning quite exciting, but he is still perfect in converting save opportunities this year. Our Phillies have gone up 1-0 in the first round of the playoffs.

How 'bout an Ice Cold Brew to celebrate? The Brewers have now lost 5 straight games at Citizens Bank Park over the past 3 weeks. In those 5 games, the Brewers are 25-for-155...that's a .161 batting average. Surely, we all realize the Phils have missed the Brewers' best starting pitcher, C.C. Sabathia, in those 5 games. This evening's match up with Brett Myers facing Sabathia will be interesting. Myers threw a complete game 2 hitter against the Brewers back on September 14th. Sabathia was 2-2 with a 2.11 ERA in 6 September starts for the Brewers.

Here is an interesting tid bit that not too many people heard about this Brewers-Phillies series, so perhaps it is worth mentioning. Yovani Gallardo is the very first pitcher to ever start a post season game without a regular season record. Gallardo missed much of this season with a knee injury, and finished the regular season without a win or a loss.

For those of you who missed it, Mitch Williams threw out the ceremonial first pitch prior to game 1 of the NLDS, and in classic "Wild Thing" style...he threw the pitch away, over the catcher's head. Great humor there by the Phillies' phormer closer.
Philadelphia police were on hand in full force for pre-game ceremonies, and an officer who was recently injured on the job also threw out a ceremonial first pitch. Mitch Williams removed his own jersey and gave it to the officer as a sign of respect.

It's quite possible that the best moment of game 1 came between innings. The Phillies promotions department staged a fake "Milwaukee Sausage Race". Those of you who are familiar with baseball, should be aware that the Brewers are famous for a game promotion where they have a Bratwurst, Sausage and Kielbasa race around the field, between innings. The most famous moment in wiener racing history, was phormer Phillie Randall Simon (who played for the Pirates at the time) whacking one of the particants with a bat as he passed the visitors' dugout. Yesterday's fake race, featured a fake Simon whacking one of the racers. The highlight of the race came when the leading frankfurter passed the Phils' dugout...the Phillie Phanatic emerged and executed a flying leap to tackle the lead racer to the turf. The Phanatic then completed the race and was crowned the winner. The eruption from the crowd was nearly as loud as when the Phillies' scored runs that day. Way to go, Phanatic. You will always be my phavorite Phillie!

One more note on my boy, Colbert, for ya. The last time the Phillies won a post season game, Cole Hamels was 9 years old.

Okay, gang...until next time, make sure you root-root-root for the Phill-ies! Because if they don't win, it will be a shame.