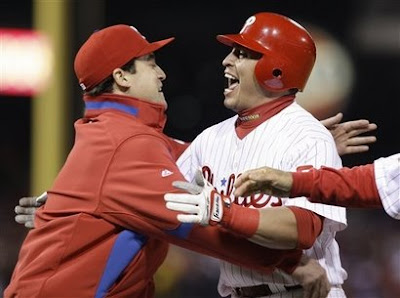 Jamie Moyer was one of the Phillies' stars of game 3. He proved many critics wrong, including me. He put forth a very solid effort and gave the Phillies a chance to win the game. Moyer pitched 6 1/3 innings and was charged with 3 runs (only one of which was ligitimate, but I'll get to that later). JC Romero got the win in relief by tossing 1 1/3 innings of perfect baseball.

The second star of the game was Carlos Ruiz. Ruiz got the game winning infield single in the 9th inning. Carlos in the last two games is 4-for-5 with 3 walks, 2 doubles, 1 HR, 2 RBI, 1 SB, and 2 runs scored. His OBP in this series is .667. Major shout out to my pal Sarah, who predicted Ruiz would be the key to the Phillies' success in game 3.


Ruiz's walk-off dribbler was just the Phillies' second hit with runners in scoring position in this series. The Fightin's are now 2-for-33 (.061 avg) in that situation.


Hey, guess what...Jayson Werth still needs to be benched! Werth, stole 2nd base in the bottom of the 8th with no outs in a tie game. After Chase Utley struck out, Werth made another huge base running mistake and was picked off second base, by the pitcher JP Howell. This squashed a great opportunity for the Phillies to take the lead.

The Rays' game 4 starter Andy Sonnanstine is a righty and, as I previously wrote, lefty hitters Geoff Jenkins or Matt Stairs need to be in the starting lineup.


This victory is the Phillies' first game 3 win in World Series history. The Phillies were previously 0-5 in game 3's, including four 1-run losses.


If there was any proof that MLB needs to expand the newly implemented "instant replay", the 2008 World Series is just that proof. In game 3, Tom Hallion gave the Rays another gift by making the wrong call on a play where Jamie Moyer dove and scooped the batted ball to Ryan Howard. The ball clearly beat the batter to the bag. This lead to 2 runs for the Rays and chased Phillies starter Jamie Moyer from the game. Now add Hallion's miscue to the awfullness that was Kerwin the Awful Umpire in game 2, and MLB should have enough to validate instating a "Challenge" system, like the NFL uses. Right now baseball has replay that umpires can use for potential homerun calls to determine if the ball has surely left the field of play, or whether a ball is fair/foul. Homeruns are not always the most crucial hit in a baseball game. Plays at first base, or determining if a pitch has hit a batter can be just as game-changing, and often times more important to the outcome of a ballgame.


Country music singer Tim McGraw threw out a ceremonial first pitch prior to game 3 of the World Series. Tim McGraw's father was, of course, Tug McGraw...phormer Phillies closer and the man who threw the final pitch of the 1980 World Series to strike out Willie Wilson, of the Royals, to clinch the only championship that the Phillies have won. Tug passed away in 2004, but will always be a legend to Phillies phans. Tim brought along a bit of Tug's ashes to the ballpark on Saturday night, and spread them on the pitching mound.

Did anyone see that shot that Evan Longoria hit in the 6th inning? How did that look, off the bat? Did the announce crew react like it was going quite far? Did you think it was outta there? I think we all did. But it seemed to simply die in flight,came down quickly and was recorded as just a long fly out to left field. Could there have been an angel in the outfield...hovering...looking over the team...knocking down Rays homerun balls? Yes.
Thank you, Tug.