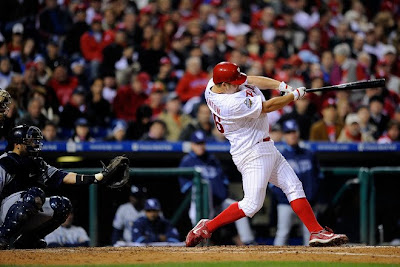 One win away from a world championship. I am so silly-insane-outrageously-excited that I can't stand it.

The bats were on fire in game 4 at Citizens Bank Park. The Phillies pounded 12 hits, 4 of which were homeruns. Ryan Howard slugged 2 homers and had 5 RBI in the 10-2 victory. Even Phillies winning pitcher Joe "I Wear Cool Socks" Blanton mashed a homerun to left field off of Edwin Jackson. It was Blanton's very first major league homer. Blanton pitched 6 solid innings, striking out 7 and allowing only 2 earned runs.

Many players contributed in the game 4 victory. In addition to Howard and Blanton...Ryan Madson, Pedro Feliz, Jimmy Rollins, JC Romero and even Jayson Werth all chipped in with key efforts. This has become key for this 2008 Phillies squad to have different heroes and varied contributors each night. When some guys fail to get the job done there's usually someone else coming through with a big performance. And in certain games, like this one, everybody hits (or pitches well)...woo hoo!


The combo of the Rays' 3rd and 4th hitters, Evan Longoria and Carlos Pena, have combined for a dismal 0-for-29 performance in the World Series. The two Rays sluggers have 15 strike outs and just 2 RBI total.


Tim Welke was the terrible umpire of the night in game 4. This time the call went in the Phillies' phavor. In the first inning, Welke blew a call on a run down between 3rd base and home plate when Evan Longoria clearly tagged a diving Jimmy Rollins, but J-Roll was called safe. MLB should seriously consider fixing the replay system during the offseason. A challenge option, like the NFL uses, for safe/out calls really seems most ideal.

Cole Hamels has the chance to become the first pitcher in MLB history to win 5 starts in a single post season. Colbert, should he win game 5, could record the greatest post season a pitcher has ever had. Cole has a 1.55 ERA through 4 starts this post season.

Don't count those proverbial chickens, but Ricky Bottalico said it best on the CSN post game program following game 4...simply put: "It's going to be nuts." I will be at game 5, and there's no other place I would rather be on this Earth. It's been 25 years since Philadelphia has won a major sports championship. All these years of craving and yearning for a winner will result in the hugest eruption of sheer joy and unrivaled bliss that any sports victory has ever spawned.