Ready for The Series 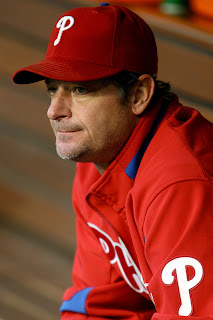 Cowbells, mohawks, bad math equations...these things all await the Phillies in St. Petersburg. The Rays' fan base is mostly Johnny Come-Lately's. Their stadium is a mess. But the team has made history. The Rays have 37 more wins this year than they had last year. That is the biggest increase, from one year to the next, in modern baseball history.


World Series note of the day #1- Phillies 25th man So Taguchi is the only player on either team to record a base hit in the World Series.

Both teams are not required to set their rosters till Wednesday morning. There has been some speculation that catcher Lou Marson would make the World Series roster for the Phils, so that back up catcher Chris Coste could be used as a designated hitter against lefties, and that would cut the risk of leaving the Phillies in a stuck position if starting catcher Carlos Ruiz were to become injured during a game. MLB rules state if your DH plays the field, the team loses their DH, and the pitcher must bat, or be pinch hit for. That same speculation has So Taguchi as the potential player to be trimmed off the roster.


World Series note of the day #2- Phils pitcher Jamie Moyer attended the championship parade that followed the 1980 World Series, when the Phillies won the only title in team history.

Phillies manager Charlie Manuel has announced that his starting pitching rotation will not be altered for the World Series. Expect Cole Hamels to start game 1, Brett Myers to start game 2, Jamie Moyer will start game 3, and Joe Blanton would get game 4. That follows in order for the remaining games...Hamels for 5, Myers for 6, Moyer for 7. Personally, I don't like that at all. Moyer has been awful this post season, and if I could make the call, Moyer would not get another start, let alone TWO more starts, the second being in the 7th and final game. A fine way to expell Moyer from the rotation this series would be to have the three other starters going on short rest. Sure, Cole Hamels has expressed some reservations about going on three days rest, rather than four. But couldn't he do it just once, with the greatest prize baseball on the line?! Using Brett Myers, a guy who thrives under pressure and has proven successful making starts on short rest, in game 1 could allow him to pitch games 4 and 7 also. Hamels starting game 2 and coming back on three days rest, would have him slated for game 5. Joe Blanton could then start games 3 and 6. I simply trust three starts from Myers more than I trust two starts from Moyer. And if needed, for the sake of babying Hamels and giving Cole his usual rest between starts, maybe Moyer starts game 4 or 5 only. Again, I believe the less starts Moyer makes, the better off the Phillies will be.

If Moyer was skipped as a starter, having the lefty, Moyer, out of the bullpen, then allows the Phils to trim "Jay" Happ from the roster to make room for Lou Marson. This would leave World Series veteran So Taguchi available for pinch hitting ineptitude.

Don't get it twisted...I am very happy for Jamie Moyer to be reaching the World Series for the first time in his 22-year career. I just think it's crucial for the manager to recognize when his players are spent, exhausted and not valuable to the team. This is the World Series. There is NO ROOM for kind gestures toward the loveable, gentle veteran. There is NO ROOM for "owing the guy who got you there a start". That is garbage at this stage. Moyer could certainly still help the team win, but I just don't see him as having the best chances to do so.


Many people have declared Cole Hamels the best Phillies pitcher in a generation. He's also likely the best home grown pitcher in two or three generations. In comparison to that last great Phillies lefty from a generation ago, Steve Carlton, in the 1980 championship season, Colbert looks just as good or better.


I leave you with this Tampa Bay vs. Philadelphia note. While the best two teams in baseball are from these two locations, the worst two hockey teams are from the same places. The Flyers and the Lightning are the last two winless teams in the NHL this season.

Anonymous said…
Great blog Ballz! I learn something new every time. I am pumped for this series. Go Phils!!