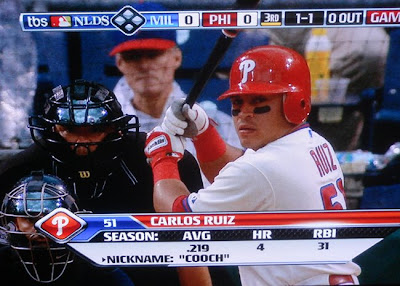 We're having the opposite experience of what we lived through in the post season of 2007. My collection of rally towels will soon exceed the amount of strike outs that Ryan Howard gets in a season. TBS gave Carlos Ruiz a new nickname (formerly Chooch). I gave that Brewers guy one of my own..."Chokey Choke" Sabathia had gone 31 straight starts without giving up as many as 5 earned runs (he allowed 5 ER in 3 2/3 innings pitched in game 2). Shane Victorino hit the very first post season grand slam in Phillies history. The ESPNews ticker stat of the night that I couldn't ignore was....Utley & Howard combined- 0-for-7 with 6 strikeouts, in game 2.

Game 3 of the NLDS in Milwaukee will feature Jamie Moyer vs. Dave Bush.