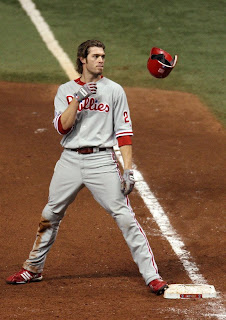 
Phillies RF Jayson Werth got the Rays off to a hot start with an error that put two runners in scoring position for the opponents. That led to two RBI ground outs from Rays hitters (Hey, Ryan Howard...take a lesson) and they left the first inning with a 2-0 lead.


Then, in the 5th inning, Werth made his second error of the game...this time it was on the bases. He was doubled off first on a fly ball to lucky Rays RF Rocco Baldelli. Later, Baldelli was given a gift by home plate umpire Kerwin "I have the most Caucasian first name on Earth" Danley. In the 2nd inning, Baldelli failed to hold a check swing and, even though Danley gestured to ring Rocco up on a swinging strike, Danley second guessed himself and deferred to the first base umpire on the call. Baldelli clearly did not hold his swing, but was given a free pass when the umpires blew this call. Kerwin D. then proceeded to call strikes on Ryan Howard that were a foot outside, and of course there's the hit by pitch he didn't call for Jimmy Rollins in the 9th inning. Terrible officiating by this umpire in the most crucial series of the year.

Aside from wanting to violate Kerwin the ump's rear end area with my size 12 New Balances, my main frustration following game two is Jayson Werth. Werth against righties this season had 6 homers and 31 RBI in 263 at bats. Werth got the start while two lefty right fielders sat the bench. Those two RF's are Geoff Jenkins and Matt Stairs. Jenkins against righties had 9 homers and 28 RBI in 270 at bats. Stairs had 12 homers and 44 RBI in 303 AB's. All three men have extremely similar batting averages against right handed pitchers this season (Werth- .255, Jenkins- .256, Stairs- .254), but when Werth stays hitless with runners in scoring position in the post season, it is probably time for Charlie Manuel to set aside his man-crush on "Jay-Dubya" and let a lefty batter brotha get a chance.


If the Phillies are going to win this series, they will really need some clutch hitting. 0-for-13 with runners in scoring position in game 1, and 1-for-15 with runners is scoring position in game 2. That is a .036 batting average with RISP in the World Series. The Phillies have also left 22 runners on base over 2 games. Additionally, the Phils' leadoff batter, Jimmy Rollins, still has not been on base in The Series, after putting up his second straight 0-for-5 game.


Okay, just as I give you all a fresh dose of bad stuff after a win, I shall dish out the hot goodness after this loss. Cole Hamels is the 10th pitcher in Major League history to win 4 starts in a post season. Historically, seven of the previous nine pitchers to accomplish this feat have pitched for the team that won the World Series. That is good odds.

The two pitchers who won 4 starts for a World Series loser were Orel Hershiser for Cleveland in 1995 and John Smoltz for Atlanta in 1996.