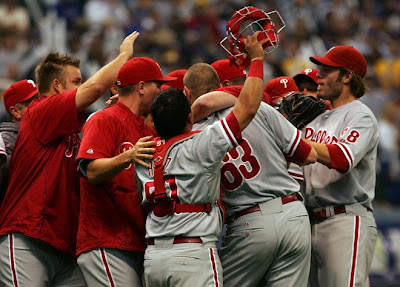 Congratulations to the Fightin' Phillies and all you Phans on advancing to the National League Championship Series. A best of seven series begins at 8pm on Thursday, in Philadelphia, against the Dodgers. Game 2, is scheduled for 4pm on Friday, also at home. All NLCS games will be broadcast on FOX.

The Dodgers have 3 coaches that are phormer Phillies. Dodgers 3rd base coach, Larry Bowa played as a Phillie and managed the team, of course. Bullpen coach Ken Howell was a Phillies pitcher in 1989 and 1990. And Dodgers first base coach, Mariano Duncan played with the Phils in the early 90's.

And on that note, here are some Phillies who used to be Dodgers...Phillies first base coach Davey Lopes is a former Dodger. Jayson Werth was with LA, before he signed with Philadelphia. And Shane Victorino is a product of the Dodgers' minor league system.

The Phillies are expecting Chase Utley to improve his performance at the plate in order to stand a chance at making it to the World Series. Combined for the 2007 and 2008 division series, Utley is 4-for-26 (.154 batting avg.) with 4 RBI, 4 walks, and only 1 extra base hit (a double in game 1 of 2008, that Mike Cameron should have caught).

If Pat Burrell displays some more hotness in the post season, phans will surely be all over the Phillies' powers that be to get Burrell signed to a new contract. Burrell is a free agent after this season. The payroll is expected to really jump next year, with guys like Howard and Blanton eligible for arbitration. Burrell wants to stay, but will there be enough money left to pay him? One great day at the plate doesn't prove his worth though, so if Pat wants to be shown the money, he's got another series ahead to show his value.

There's one Phillies offensive player who would absolutely qualify as HOT against the Dodgers. He's the man who needs to get on a roll, Chase Utley. Utley's got a .339 avg in 29 games against the Dodgers. Another Phil with solid success against LA is former Dodger, Jayson Werth- .323 avg in 11 games.

Other than Werth and Utley, the next highest career Phillie batting average against the Dodgers is Geoff Jenkins' .270 clip.