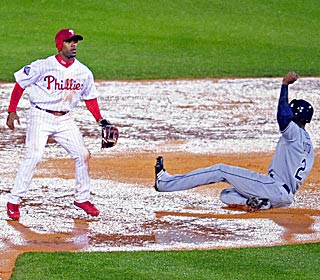 Game 5 is suspended till further notice, with a tied score. The commissioner of MLB is not good. The game should have been stopped sooner.

The game is tied at 2 after 5 1/2 innings. When the game resumes, the Phillies will have 4 turns at bat against the Rays, who only have 3 turns at bat. That still does not make up for the Phillies and Cole Hamels having to pitch an extra turn on a wet, muddy mound in an extreme down pour. When game 5 is restarted, the Rays will get to pitch off of a dry, nicely groomed mound. That's an advantage for the Rays pitchers that Cole Hamels did not have in the same inning.

There were multiple instances where gameplay was proven to not be under normal circumstances. The umpiring crew suspended the infield fly rule early in the game, when the Phillies had multiple runners on, due to the weather, pop flies were no longer routine. When an infield pop up is not routine, due to weather conditions, the game should be halted. Later, Jimmy Rollins, a Gold Glove short stop, had trouble with a pop up in the infield. Swirling winds and terrible rain gave Rollins trouble, and the game became a joke when played beyond that point.

The umpiring crew continues to be the story of this World Series. Big mistakes on plays in the games are now added to huge errors in judgement. For some reason the safety of the players and integrity of the game became more important after Fox reached a 3 hour broadcast.

Game 5 resumes at a time to be determined, when weather permits.