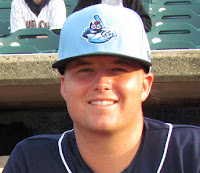 It was announced on Tuesday that Clearwater Threshers right-handed pitcher Tyler Knigge was added to the Northern division All-Star team in the Class A Advanced Florida State League.

After receiving word of the honor, Knigge was absolutely pleased to be recognized for his exceptional efforts this season.

"I'm honored to be a part of something like this," Knigge said. "I'm happy that I was chosen to take part in the All-Star Game and I will represent the Threshers and the Phillies organization to the best of my abilities."