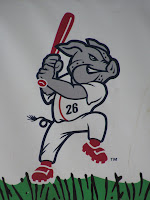 Reports out of Allentown on Monday night, following Lehigh Valley's rain out against Pawtucket, said that righty hurler Dave Bush has opted out of his contract with the Phillies and is headed to Korea to pitch.

Through 11 starts this season, Bush had posted a 4-3 record with a 3.16 ERA.  Bush, a graduate of Conestoga High School, in PA, has pitched in the big leagues with Toronto, Milwaukee and Texas.  The 32-year-old stood a fair chance at being called upon if any further injuries occurred to the Phils' starting rotation.

In other IronPigs news, outfielder Derrick Mitchell is sidelined with a broken right hand after he was hit by a pitch from Pawtucket's Garret Mock on Sunday night.  The 25-year-old Mitchell, a 23rd round draft selection in 2005 by the Phillies, was fresh off an 8 RBI day after he drove in 4 runs in each game of Saturday's double header.

Right-handed pitcher J.C. Ramirez was promoted from Double-A Reading to Lehigh Valley on Monday.  Converted this season from a starter to a reliever, Ramirez has posted a 0-2 record with 3 saves and a 3.62 ERA in 16 outings this season.  Ramirez's strike out to walk ratio (18:14) certainly could use some improvement, but now he'll get to work on that with well-praised pitching coach Rod Nichols. The 23-year-old was acquired from Seattle as part of the December, 2009 Cliff Lee trade.

It is unclear if Ramirez will return to a starting role and fill the void left by Bush, but it is not likely.

Outfielder Domonic Brown has posted a .361 batting average with a double and 2 HR in his last 9 games for Lehigh Valley.  The current hot streak has raised Brown's season average from .231 to .264.

And lastly, utility man Michael Martinez, who has been on the disabled list for the entire season thus far with a right foot injury, will be activated and added to the IronPigs' roster.  Martinez had played in 4 rehab games for the Class A Advanced Clearwater Thresher over the past several days.  In those games, Martinez went 5-for-15 (.333 avg) with a double and 2 RBI.