By Jay Floyd June 11, 2012
It's time, once again, for the (usually) weekly Phillies minor league review. In this edition, we'll take a look at some hot performers, some less-than-hot performers and a college draftee headed to the College World Series. 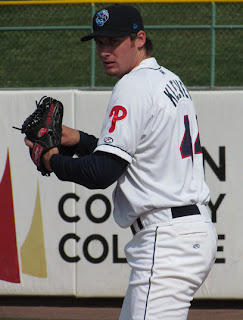 Right-handed starter Colin Kleven (pictured, left) was named Lakewood's lone representative in the SAL All-Star Game this past week. The 21-year-old native of British Columbia has posted a 3-5 record with a 3.90 ERA in 11 starts this season.  Kleven was a 33rd round draft choice in 2009.

Lefty starting pitcher Ethan Stewart has been on a roll this month, posting wins and an ERA of 3.00 in back to back starts. The New Mexico Junior College product was a 47th round draft choice by the Phillies in 2010.

Infielder Stephen Malcolm has had a considerably slow start with Lakewood since joining the team out of extended spring training in May. In 23 games, the 22-year-old, who was drafted in the 8th round of the 2010 draft, has tallied a .159/.270/.222 line in 23 games. Malcolm replaced shortstop Tyler Greene, who posted a .147/.270/.267 line in 23 games. Greene was sent to extended spring training and is expected to play with the short-season Class A Williamsport Crosscutters, who begin their season on Monday, June 18th. 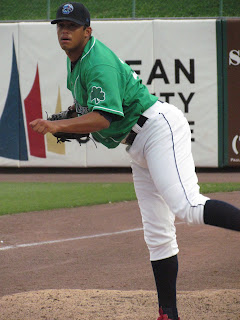 Lefty hurler Mario Hollands (pictured, right) has been on point since joining the Threshers roster recently. In two starts in the FSL, the 23-year-old has a 2-0 record with a 0.82 ERA while striking out 7 and walking only 1 in 11 innings. With Lakewood this season, Hollands, a 10th round draft selection in 2010, went 0-1 with a 4.57 ERA in 9 games (2 starts).

Outfielder Zach Collier has been scorching hot since being activated from the suspended list. In 11 games, the 34th overall draft pick by the Phillies from 2008 is batting .364 with 4 doubles, a homer and 8 RBI. Collier, 21, missed the opening 50 games of the season after testing positive for banned substances last year. 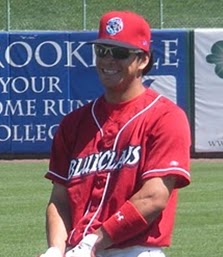 In his past 10 games, catcher Sebastian Valle (pictured, left) is batting .316 with a double, a triple, 2 HR and 9 RBI. The 21-year-old Mexico native is batting .247 in 46 games overall this season with Reading.

Reliever Justin Friend has been virtually untouchable with the R-Phils this season. The 25-year-old right-hander has tallied a 1-0 record with 11 saves and a 0.45 ERA in 19 games this season.

Right-handed reliever J.C. Ramirez has has two scoreless outings since being promoted to Lehigh Valley. Ramirez, 23, had a 3.62 ERA and 3 saves in 16 games with Reading prior to the promotion.

Since earning a promotion to Lehigh Valley, outfielder Steve Susdorf is batting .345 with 6 doubles and 10 RBI in 20 games. The 26-year-old Fresno State University product was a 19th round draft choice by the Phillies in 2008.