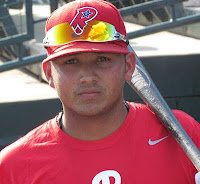 News broke on Tuesday afternoon that Phillies rookie infielder Freddy Galvis had been suspended for 50 games after he tested positive for metabolite of Clostebol, which is a performance-enhancing substance. Clostebol is a clear violation of MLB's Joint Drug Prevention and Treatment Program.

The suspension is effective immediately for the 22-year-old, who was already out of action due to a back injury. It is unclear when the positive test result was discovered.

Galvis, a native of Venezuela, issued the following statement:

"A trace amount of a banned substance -- 80 parts in a trillion -- was detected in my urine sample. I am extremely disappointed in what has transpired. I cannot understand how even this tiny particle of a banned substance got into my body. I have not and never would knowingly use anything illegal to enhance my performance. I have always tried to follow the team's strength and conditioning methods, listen to the trainers, work out hard and eat right. Unfortunately, the rules are the rules and I will be suspended.

“I'd like to apologize to my all my fans, especially here in Philadelphia and back home in Venezuela, to my teammates and to the Phillies organization. I am looking forward to putting this behind me, rehabilitating my back and returning to the Phillies as soon as possible to try to help them win another World Series.”

The Phillies organization issued a statement as well:

"The Phillies continue to believe in and endorse Major League Baseball's drug policy. We also support Freddy Galvis in his determination to put this matter behind him and we look forward to his return as a productive member of the Phillies as soon as possible."

Mike said…
Sucks, but what can you do?

I'm moderately pissed (on top of everything else that's happened to Philly this season), but I'd like more info before I pass judgment on Freddy. Doubt it'll get provided though.
June 19, 2012 at 10:41 PM