The Strange Timeline of Domonic Brown 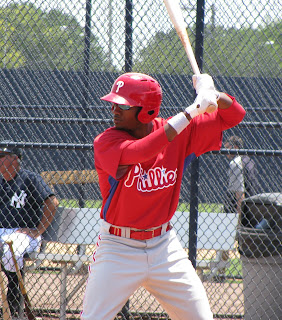 With reports of another injury to Domonic Brown, the usual high hopes for the prized Phillies outfield prospect have taken another dip in the waters of woe. In recent years, the toolsy Brown has had many ups and downs as he has tried to rise to the highest level of baseball and stay there. Here's a look at some key moments in his so-far frustrating career.

June 6, 2006 - Brown is selected in the 20th round of the MLB amateur draft by the Phillies out of Redan High School in GA. Brown signs his first pro contract one week later.

2010 - Prior to the season, Brown is named the Phillies' top prospect by Baseball America.

April 26, 2011 - Brown returns to baseball activity and rehabs with Clearwater.

September 16, 2011 - Brown promoted to major league team when Triple-A Lehigh Valley's post-season ends. Has just one at bat in the closing weeks of the season.

2011/2012 off-season - Phillies general manager Ruben Amaro expresses his "druthers" in relation to Brown, saying it would be ideal for the 24-year-old to spend a full season at Triple-A Lehigh Valley.

March, 2012 - Brown posts a .300 batting average with two triples and a homer in seven spring training contests with the Phillies.

May 7th, 2012 - Brown sidelined with a left hamstring strain. Misses more than two weeks of action.