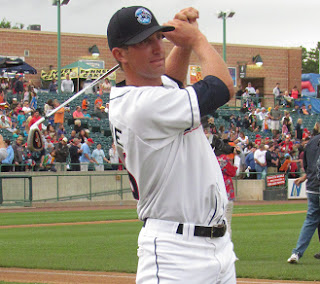 It wasn’t the debut Colby Shreve wanted to make at the Double-A level. On Thursday, fresh off the excitement of his second promotion of the season, the 24-year-old surrendered three hits and walked three batters, while letting up six runs (five of those earned) in two-thirds of an inning, in relief for the Reading Phillies. The disappointment was far greater than he had felt at any point on the pitcher’s mound, but Shreve knew that he would bounce back and prove himself worthy of competing in the Eastern League and beyond.

Following six outings with Class A Lakewood early this season, the right-handed Shreve, sporting a 3.60 ERA and 9.6 strike outs per nine innings, was promoted to Class A Advanced Clearwater. Shreve then sported a 2.25 ERA and an 8.55 K/9 mark in 13 outings for the Threshers while recording two saves. Last week, the Southern Nevada Community College product then took another step upward and didn’t make the kind of splash he hoped for. His initial outing for the R-Phils was actually more of a crash.

"I mean that's probably one of the worst outings of my life,” Shreve said. “Honestly, I knew what the problem was. I was just a little too amped up, you know. I waited a long time to get to Double-A, so, maybe (I was) just overthrowing a little bit and not getting ahead of hitters, I think.”

Following what could easily be described as an atrocious outing, Shreve quickly bounced back with his next effort, a scoreless, hitless inning to close out Reading’s 7-2 win over Harrisburg on Saturday.

“I wanted to get back out there within the next couple days just to get a good one in. Hopefully, I got the worst one out of the way first," Shreve stated.

A hurler that the Phillies believed in so much that they drafted him as early as the 6th round in 2008 despite the fact that he was sidelined, requiring Tommy John surgery at the time, Shreve has proven to be a very capable arm out of the bullpen, as has seen the velocity on his fastball climb a notch or two this season. Regularly reaching 94 MPH after previously registering in the low 90’s, the 6-foot-5-inch 210-pounder credits some extra work with his added heat.

"Actually, when I went down to Clearwater, my velocity jumped pretty well,” Shreve, who also throws a slider, a change up and a sinker, said. “I attribute it to the trainers, all the exercises and our strength and conditioning guys, they have us very regularly in the gym twice a week- upper body, lower body, after we pitch and that kind of thing."

Prior to returning to Clearwater, where Shreve posted a 1-1 record with a 3.55 ERA in 7 appearances last year, the Las Vegas native was disappointed when he was assigned to open the 2012 campaign with the Lakewood BlueClaws. Shreve had spent parts of the past two seasons in Lakewood.

Admittedly, Shreve was so confident this year that his time with the 'Claws was temporary that the avid golfer did not bring his golf clubs north to New Jersey when this season began. The reason Shreve was so sure that he wasn't staying in Class A very long was his own work ethic, after a conversation with organizational brass laid provided a blue print for advancement.

"It was definitely a talk that me and (Phillies director of player development) Joe Jordan and Gorman Heimueller, our pitching coordinator, had at the end of spring training," Shreve explained. "Obviously, I was demoralized, going back to Lakewood for the third straight year. But they laid it flat out. They said, 'Work on what we want you to work on and you'll be out of there in no time.' And...they stuck by their word and I worked hard and pitched pretty well and I moved up...twice."

After the debut hiccup and the redeeming effort that followed, Shreve's new home ballpark, Reading's FirstEnergy Stadium, has already made a big impression on the youngster. He cites the big difference between the vibe at Brighthouse Field in Clearwater, where crowds don't quite match up to Reading's fans that are generally straight out of the heart of big league Phillies territory.

"I love the environment. It's definitely the most fun and exciting ballpark I've ever been to as a fan or a player. It's a great environment, I like it a lot," Shreve said.

With the Phillies roster using a heavy rotation of pitching options, due to injuries, perhaps it won't be too long before Shreve get a tastes of a real Philadelphia crowd. Until then, he'll certainly continue to strive to progress further to make that a reality.

On getting the news about the promotion to Reading-

"I was ecstatic. First things first, I called my mom and my dad. My mom was crying because she knows how hard I've worked and putting in the time for rehab after surgery and stuff like that. And my dad was very happy too. I called my brother, (Chasen Shreve) who is in High-A for the Braves, he's doing very well. It was great. The girlfriend was kind of sad that I was leaving, for a split second, and then she was happy for me."