Nats' Johnson Was Right to Rat on Peralta 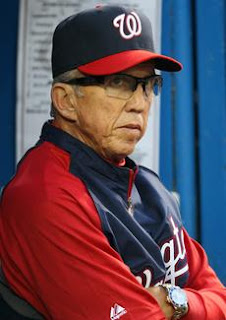 It's a rarity that I include opinions here on the site, but the much-talked-about Joel Peralta ejection on Tuesday night has me itching to put my thoughts out there.

If you missed it, Tampa Bay Rays reliever Joel Peralta was ejected from Tuesday's contest against his former club, the first-place Washington Nationals, prior to ever throwing a pitch in the game. Nationals manager Davey Johnson asked the umpiring crew to check Peralta's glove for a foreign substance and pine tar was found. Clearly, Johnson knew of the pitcher's tendency to utilize the sticky material, which is acceptable for batters but banned for pitchers.

Rays manager Joe Maddon was beyond angry over the situation, using vulgar language to describe what he thought was an uncool maneuver.

"It was kind of a p***y move to go out there and do that under those circumstances. I like the word p***y move," Maddon was quoted as saying, following the Rays' 5-4 victory over the Nats.

He added that Johnson's intent to have an opposing player disqualified from the game in that fashion was bush league and cowardly.

In the day since the incident, the opposing managers have swapped insults through the media, with Johnson referring to Maddon as "a weird wuss".

Please keep it real, folks. Surely fans of basement dwelling teams despise the clubs on top, but why should anyone allow another team to cheat against them? It seems people would rather diss the team that's on top of the National League East division standings than place proper blame on a man that was caught breaking the rules of a sport that those same folks hold sacred.

Davey Johnson isn't wrong for using what he knows about a player that played for his club when he faces that player's new team. If Washington personnel were aware that Peralta had a tendency to tip a certain pitch and they told all their batters about it to gain an advantage, that would be smart coaching. The same applies when they disable a player from cheating against their team. This was simply a case of an intelligent move by a veteran manager.