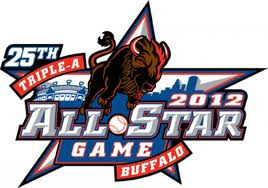 The Lehigh Valley IronPigs will have two player representatives in the Triple-A All-Star game, when righty hurler Tyler Cloyd and infielder Kevin Frandsen head to Coca Cola Field in Buffalo, NY on Wednesday July 11th.
The annual exhibition pits the best talents of the International League against the top players from the Pacific Coast League.
Cloyd, who was an 18th round draft selection of the Phillies in 2008, has had an exceptional season. The 25-year-old began his 2012 campaign in Double-A with the Reading Phillies and has proven worthy of considerable recognition as he has posted 10-1 overall record with a 2.07 ERA in 15 combined starts at two levels. The Nebraska native will start the game for the IL team.
Frandsen, a right-handed hitter that was signed by the Phillies as a minor league free agent prior to the 2011 season, has posted a .290 batting average with 23 doubles, 26 RBI and 28 runs scored in 74 games for the 'Pigs this year.
Additionally, IronPigs manager Ryne Sandberg will serve on the IL club's coaching staff.
The International League has won eight meetings in the fourteen years since the event changed to the current IL vs. PCL format. As in previous years, the winning league this season will earn the right to have its champion play as the "home team" at the Gildan Triple-A National Championship Game which is set to take place Tuesday, September 18 in Durham, North Carolina.