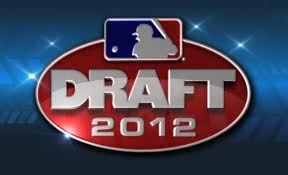 On the opening day of the 2012 MLB amateur draft, the Phillies had two picks and used them in a familiar manner.  With their selections, the team stuck to their usual style and chose a pair of high school players.  With the 40th overall pick in the draft, the Phillies chose Shane Watson out of Lakewood High School in California.  Additionally, the Phils took Mitch Gueller with the 54th overall selection out of William F. West High School in Washington state.

Watson and Gueller, both right-handed hurlers, are committed to play college ball...Watson at the University of Southern California and Gueller at Washington State University.

Watson's pitch repertoire features a fastball that is steadily clocked at 93 MPH and climbs into the mid-90's at times, a great curveball as well as a cutter and a change up.  Watson stands 6'4" and weighs around 200 pounds.

As a pitcher this season, Gueller posted a 6-0 record with 2 saves and a 0.80 ERA.  Reports also state that Gueller surrendered just 12 hits all season while striking 70 batters. The 6-foot-3-inch 215-pounder is armed with a fastball that generally gets clocked in the low-90's, with a good curveball and change up that offers a variance of 10 MPH or more.

At the plate, Gueller, who also played outfield in high school, drew some attention as well.  He sported a .323 batting average with five home runs and 19 RBI while racking up 29 walks.

In recent years, the Phillies have been notoriously partial to high school players with their earliest picks, taking Larry Greene Jr., Jesse Biddle, Kelly Dugan, Zach Collier and Anthony Hewitt with the organization's initial draft pick in the past four seasons.

Watson isn't the first Lakewood High School product taken by the Phillies in the first round (supplementary).  Catcher Travis d'Arnaud, 37th overall pick in 2007, is a product of the same school.  d'Arnaud was traded to Toronto in the December, 2009 Roy Halladay deal.