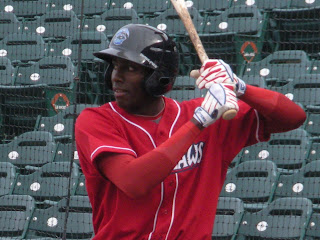 Switch-hitting Phillies prospect Jiwan James earned plenty of recognition last season, as he set the Class A Lakewood hitting streak record at 24 straight games and led the team in runs scored with 85. James, who will turn 22 years old in April, has reported early to Clearwater, well ahead of the March 1st report date for minor league spring training camp.

Drafted out of high school as a pitcher in the 22nd round of the 2007 amateur draft, James made the switch to the outfield in 2009 where he played in 30 games with the short season Williamsport Crosscutters. As a member of the Cutters, James batted .264 with a homer and 13 RBI. The positional switch was necessary due to a lingering arm issue that James dealt with during 2008.

In 2010, while helping the Lakewood BlueClaws lock down a second straight South Atlantic League title, James, who stands 6-feet-4-inches tall and weighs around 185 pounds, shined batting at the top of the order in manager Mark Parent's lineup. In the longest season of his career, James posted a .270 average with 26 doubles, 6 triples, 5 homers and 64 RBI in 133 games played.

Fatigue seemed to be a factor for James, down the stretch, as he went from a .361 average in July to a .220 batting average in regular season games after July and began the postseason with a 1-for-16 slump, before collecting three hits in game 2 of the SAL championship series against Greenville. As James gets used to playing such lengthy campaigns, it's not likely that his production will continue to suffer as time goes. Instead he will develop his strength and stamina to go along with his adaptive athleticism.

Areas of his game that James should focus on include his pitch recognition and his stolen base percentage. James struck out 132 times in 133 games during the 2010 regular season. As he learns to pick up opposing pitchers' off-speed pitches and improves his ability to make contact, his offensive production will surely receive a huge boost. His .347 batting average on balls in play, during the 2010 regular season, is evidence of that.

In addition, James stole 33 bases with Lakewood, but was caught 20 times. As players move up to higher levels, coaches will assist more with scouting the opposing battery and augment stolen base success for their players. The extra help will benefit James, whose speed is one of his assets.

Among James' other tools are a respectable throwing arm and his tremendous defensive range in centerfield. With his long strides, James reaches balls hit into the gaps, corrals balls hit well over his head, reaches batted balls in front of him and successfully makes diving catches about as easily as he schools his teammates in poker during downtime.

Lakewood's hitting coach and longtime member of the Phillies' developmental staff Greg Legg does not view James as a gamble. Instead, Legg sees a load of potential in the toolsy lead-off man. Asked about the Florida native, James, late last season, Legg stated, "(Jiwan)'s a pillar of consistency. He pays attention to the game. I think he's only going to get better. As time goes on, he's going to learn the strike zone better, he's going to get stronger, he's going to get more power. He's got a real bright future. When he gets his man-strength, look out!"

Indeed we will look out for Jiwan James, as the highly athletic youngster is expected to move up to High A level Clearwater this season to play in the Florida State League. There's definitely much hard work ahead for James if he is to reach the highest level of baseball. The progress he achieves on the way there will determine if he can stick around and what role he will play, once he reaches the big leagues.

Jay Floyd said…
Interesting you say that without offering any reasons.

Is it because other prospect rankings of Phils players are different? Have you seen all the guys on this list play?

OBC said…
These reviews have been great. Keep it up.

Chris said…
Secrets of the trade sometimes are to throw some controversial ranks into a list like this, hoping it draws attention.

Anonymous said…
No, it's because Hyatt has been much older than his competition, pitching most of the year in A+ ball as a 24-year old. I've haven't heard anything about a mid-90's fastball, rather, I had heard it was low-90's at best, which profiles him as a likely middle relief kind of guy instead of a starter. Even with mid-90's speed, however, he definitely has not proven enough against age-appropriate competition to be ranked in the top 10 as a 24 year old relief prospect. And no way in hell is he above Biddle.

Now, for James' case, he simply hasn't proven himself offensively deserving of a top-10 rating. His ceiling is fantastic, but a guy who struck out 21% of the time while walking about 6% needs some serious work. He has very little power at this point. He may be just two years into playing the OF, but he's already 21 and really needs to progress on the offensive side of the ball. I guess if you just look at the tools alone and ignore most of his performance, he becomes a stud, but his development is no guarantee, whether or not Greg Legg says he's a "gamble."
February 16, 2011 at 5:30 PM

Anonymous said…
Also, I'm somewhat confused as to how you fit 7 or so guys into the top 6.
Unless I missed someone, Singleton, Cosart, Colvin, May, Valle, Cesar Hernandez, and DeFratus are all left.
February 16, 2011 at 5:43 PM

Hyatt's age is certainly a factor that has hurt him in other rankings in general. Age boosts other players, just the same. Example...Singleton. Nothing wrong with that.

The other commenters are onto something as far as the rankings go. I can't very well just base my opinions on the lists produced by other sites or publications. Also, a bit of controversy isn't a bad thing.

Additionally, I've seen roughly 85% of these guys play and admittedly, the 15% or so that I've not seen, haven't had the chance to make a big impact on me yet. Keep in mind too that proximity to the majors played a factor in these rankings, among other things. They aren't simply, "who I think will make it and have the best potential MLB careers". So, because of those things perhaps Jiwan is favored over Altherr, and so on.

As for the 7 names you listed, I am sure you can guess that one of those players may simply not make the list this go around.

Thank you for reading the site. I value the readers. Hopefully, you will find other content that you dig, even if you feel some of the ranks are weak. Good night to you, "anonymous".

Shout outs to you also OBC. Not sure which Chris commented, but greetings and thanks to you also.
February 16, 2011 at 11:26 PM