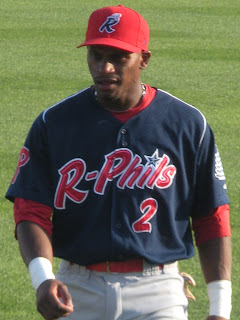 In 2004, second baseman Harold Garcia was signed as a free agent approximately 6 weeks before his 18th birthday. The 5'11", 190-pounder got his professional career started by playing three seasons in the Venezuelan Summer League before heading to the United States to continue his climb toward the big leagues.

In three seasons playing in the VSL, Garcia's offensive progression was clear, as he posted batting averages that increased annually- .226, .273, .296.

After arriving stateside, Garcia spent the 2008 season with the Gulf Coast League Phillies, where he batted .299 with 5 homers and a .907 OPS in 50 games, leading his club to the league championship. He also went hitless in 2 at bats for the High A Clearwater Threshers.

In 2009, Garcia continued his winning ways, helping the Class A Lakewood BlueClaws lock down the South Atlantic League championship. As a member of the BlueClaws, Garcia finished third in the SAL with 42 steals. He also batted .291 with 8 homers and 55 RBI with a .765 OPS in 118 games that season.

Garcia began the 2010 season with High A level Clearwater and moved to Double A Reading midway through the season. In July, Garcia broke the 59-year-old Florida State League hitting streak record, when he logged at least one hit in 37 consecutive games for the Threshers. Garcia was subsequently recognized as the Phillies minor league player of the month for June. His .335 batting average and .889 OPS with Clearwater were impressive enough to earn him a promotion to Reading.

Despite making an immediate impact by lacing an RBI single in his very first Double A at bat, Garcia's overall production took a bit of a dip (.281 avg., .743 OPS) as a member of the R-Phils, but he could certainly get an opportunity to improve those numbers this coming season. Combined at the two levels, Garcia stole 29 bases in 101 games.

Garcia, who turned 24 since last season ended, played with the Aguilas in the Venezuelan Winter League. In 28 games playing in his native Venezuela this Winter, Garcia posted a .286 batting average, scored 4 runs and drove in 4 runs. However, he only notched one extra base hit, a double and was successful in just one of five stolen base attempts.

The switch hitter, Garcia, has shown more effectiveness from the right side, going 5-for-12 (.417 avg) against left-handed hurlers in the Venezuelan League and generally posting a higher average from his natural side throughout his career.

A versatile fielder, Garcia has played 45 games at third base during his minor league career and he played both third and the outfield at instructional ball last Autumn, which increases his value as he moves higher in the system. If the big club finds itself with an injured infielder in the near future, Garcia could be a beneficial option for the Phillies to have. As a relatively efficient defender where ever he plays on the field, Garcia could have a future as a utility guy at the Major League level.

Look for Garcia to spend time at Triple A Lehigh Valley this year. Depending on his output in 2011, he could be destined to wear red pin stripes when the rosters expand in September.