General Manager For a Day

By Jay Floyd February 05, 2011
The following is a guest post by Mark Evans. Mr. Evans is a professional singer-songwriter that participated in an interview last season here on PhoulBallz.com. Click here to visit his website. 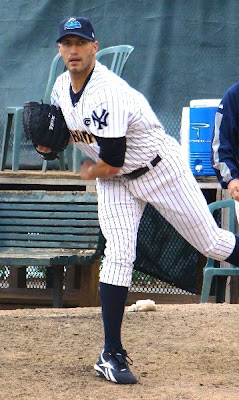 Andy Pettitte officially announced his plans to not return as an active pitcher on Friday, leaving the New York Yankees with the void they were hopeful he could fill, in their pitching rotation.

I’m not a GM. Heck; I don’t even know any GM's. Though I did once sort-of-know a girl who sort-of-knew former Toronto GM JP Ricciardi, and in the world of six degrees of separation that may count for something. But this is baseball...exact, and to the point, and the closest I’ve come to knowing a GM was the Olds Delta 88 I totaled on a slick road one night many years ago.

All that to say this – GM or not, I can’t help but recognize the most logical and doable trade that no one’s talking about: Philadelphia Phillies RHP Joe Blanton (9-6/4.82 ERA/175 IP) to the New York Yankees for switch hitting right fielder Nick Swisher (.288 avg/.359 OBP/29 HR/89 RBI). Here is why it works well for both clubs:

The Yankees were counting on Cliff Lee signing on to be their #2 behind CC Sabathia. As we all know, Cliff chose red pinstripes instead of those navy blue ones.

The Yankees were counting on Andy Pettitte to come back for another year, he’s not.

The Yankees 2011 pitching rotation currently lines up like this:

Okay, add to the mix the minor league signings of Freddy Garcia, Mark Prior and Bartolo Colon, and you still don’t have very much worth boasting about.

It all comes down to this: In a recent NY Post article, Yankees co-chairman Hank Steinbrenner was quoted as saying “[the Yankees] have to f***ing win” in 2011! I don’t know about you, but the above rotation doesn’t sound like the makings of a championship staff.

Bottom line, Joe Blanton would be a nice fit between Hughes and Burnett in that Yankees starting rotation.


-2 The Yankees have more outfielders than they need.

They’ve been stockpiling outfielders in recent weeks. The addition of Andruw Jones alone tells me the Yankees can spare Swisher. Is Jones a downgrade? Clearly. Across the board. But with the rest of that lineup, they can absorb a slight drop off in OF production much easier than they can afford to go into the regular season (much less the playoffs) with their current starting pitching.

The 2011 outfield might be Brett Gardner, Curtis Granderson, and Jones (with former Phillie Greg Golson, Justin Maxwell, Colin Curtis, and Kevin Russo in reserve), but their lineup would still look like this:


-3 The Phillies have that rare luxury of starting pitching to spare.

With 4 aces in the starting rotation, the Phils could afford to move Blanton and take a chance on rookie Vance Worley, or go with proven (but sometimes rocky) commodity Kyle Kendrick as the 5th starter. I like Worley, but neither choice is a bad one. The Phillies' rotation then shapes up, like:


-4 Their contracts are similar enough in value.


All in all, this is a trade the makes sense for both teams. Everybody wins in the short term.

So how does all of this play out down the road? Well, most importantly it gives future Phillies phenom Domonic Brown another year in the minors to truly master the game of baseball (like many of the Phils top draft picks of late, Brown was drafted for his athleticism, not his baseball pedigree). Remember, he’s only played in 100 games between double and triple A, with 62 major league at bats in 2010. A 2011 outfield of Victorino(S), Ibanez(L), Swisher(S) transforms fairly seamlessly to a 2012 outfield of Victorino(S), Swisher(S), Brown(L), and makes for a much more balanced outfield both years.

Since I’m still not a GM, I can only dream about a deal like this. But with only a handful of days till pitchers and catchers officially report for spring training, I’m fantasizing how great it would be if Phillies top dog Ruben Amaro Jr. and Yankees lead man Brian Cashman would share my vision.