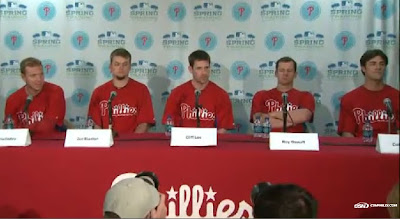 Here are some quotes from this afternoon's press conference in Clearwater, FL, where the Phillies' starting rotation met with the media.


Joe Blanton on the potential advantages of matching up against other teams' fifth starters:

I don't know if it really gives an advantage. I'm kind of facing the other lineup, not the other pitcher. So, maybe, hopefully, the other lineup falls asleep and thinks they don't have to face these four guys. I'll just kind of slip right in. It's just great to be a part of this rotation, like everyone said. We all want to win and I think that's the most important thing.

Roy Halladay on the starting staff pushing one another to perform well:

I want to go out there and do my best regardless. I hope we have shutouts every single day, no doubt about it. Obviously, the better they pitch, the better our team does. That's great. Whether the guy who pitched the day before me pitched a complete game shutout or gave up 5 (runs) in the first inning, I'm still gonna go out there and do the same thing. I want to get deep into the game, put up as many zeroes as I can and give the team a chance to win. That's really it, for me. I don't really try to compete against these guys, I'm trying to compete against the other team. That's the way I look at it. There's a lot of guys that look at it like they want to one up the next guy. If that works for you and that brings the best out of you, then that's great...more power to you. Personally, I don't look at it that way.


Cliff Lee on the expectations for the Phillies this year. Is it "World Series or Bust"?:

If we're healthy and take care of business and focus on our routines and what we need to do to prepare, then we're gonna give ourselves a good chance. If we're saying right now that we're gonna win the World Series, that's kind of getting the cart ahead of the horse. That's for (the media) to say that kind of stuff. We're focused on spring training and preparing. We expect that to happen, but nothing's going to be given to us because we've got a good rotation and a great offense.

Lee on his decision to return to Philadelphia:

I could have got more money in other places, but that really wasn't what it was all about for me. It was more about what team gave me the chance to win world championships over the life of the contract and I think this is it.

Obviously, the Rangers, where we went to the World Series last year, was a good option too. And the Yankees with their history and what they've done, that's a good option. It was three really good options, to be honest with you. I stepped back and looked at each team and evaluated, and I felt like this is the team that's going to give me the best chance to win a ring. And hopefully, multiple rings.

Obviously, the fans had a lot to do with it. They sell out every game, the stadium's packed, there's a lot of hype every game. It's a great feeling playing in that park and I wanted to come back and do more of it.


Lee on the rest of the Phillies' roster measuring up to the great expectations that people have for the pitching rotation:

I hope they prepare and come in and do everything they need to do. If they do that, then our talent should play out. We've got good pitching, we've got a good bullpen, we've got a good offense and we play good defense. If everyone comes in prepared and does what they need to do...good things should happen. It's not about us five, or even those eight. It's 25 guys. We've all got to contribute.


Roy Oswalt on what we picked up from Roger Clemens and Andy Pettitte, when they were all teammates in Houston and if he can still learn from the guys around him now:

I think the biggest thing (I learned) from Pettitte and Clemens was preparation. Those guys had a plan before they ever got to the field of what they were trying to do during a game. Stuff on the field...everyone pitches their own style, you don't really get mechanics from anyone on the field. I come here and these guys do the same thing. From the first day I get here, I'll see Cole and Doc in the video room taking notes on different things they're going to try and do in the game. I think good pitchers that are trying to get better, you try to do every little thing to get the odds on your side. I think you can learn any time. Any time you see these guys throw, you can pick up a lot of stuff. Actually, I've picked up a few things last year, watching Doc on some of his pitches. I think any time you go out, you can watch and learn.


Cole Hamels on the Phillies' ability to acquire such solid pitching talent, with the trades for Blanton, Lee, Halladay and Oswalt, as well as Lee's free agent signing:

The organization's done a phenomenal job of getting guys. Everybody really talks about, in the postseason, it's all about pitching and we have guys with postseason experience and you want that. I think we're just fortunate to be in this situation. Because I know, when I was drafted by the Phillies, the whole team's (now) almost completely different. Everything evolves and we were able to pick apart a team and then get a few of the top guys throughout the league and then put them all together.


Hamels on being the youngest of the group:

I am young and if I can learn from these guys, then I feel that I can get better.


Lee on the various nicknames for the pitching staff:

All those add up to four, it seems, and there's five of us, so I haven't heard one that sounded any good yet.


Halladay on how his emotions regarding losing in the postseason after playing in it for the first time last year compared to having a longer off-season and not reaching the playoffs every other year of his big league career:

It was definitely harder this year. I think a lot of us are at a point in our careers where you feel like the biggest thing left for you to do is to win a championship. Whether you've already done it, or you haven't. That was my only goal going into last season, was to try to win a World Series. So, coming close and coming up short is definitely hard. You have your heart set on that all year. My ultimate goal again this year is to win a world championship. Not forgetting about the steps that it's going to take to get there, but that's why I still want to play this game...I want to be a part of a world championship team. It would be tough if we got close again and didn't win it.


Unfortunately for Delaware County Times reporter Ryan Lawrence, the "lowlight" of the event came at his expense, when he clearly forgot about Joe Blanton on the live broadcast and asked Cole Hamels about being the only one among the starting staff who had won a World Series ring. Blanton, of course, was also a member of the Phillies in 2008, when they defeated the Tampa Bay Rays in the Fall Classic. Cole quickly reminded Ryan that, "Joe's got one too." After the presser, Lawrence apologized to Blanton, who said it was no big deal.