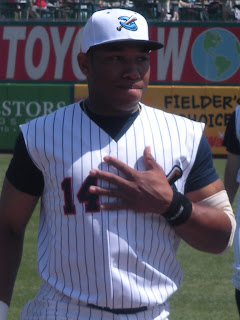 One of 2010's breakout stars in all of minor league baseball was Phillies' prospect Jonathan Singleton. Drafted in the 8th round of the 2009 amateur draft out of Millikan High School in Long Beach, CA, Singleton was already well regarded within the Philadelphia organization before roughing up South Atlantic League pitching last season.

The left-handed hitting Singleton made his professional debut as a member of the Gulf Coast League Phillies as a 17-year-old after signing with Philadelphia. In 31 games there, Singleton batted .290, slugged 2 homers and drove in 12 runs.

Nicknamed "The Boss", Singleton really emerged as he helped lead the Class A Lakewood BlueClaws win a second consecutive South Atlantic League title. Singleton actually began the season in extended spring training, but made a massive impact once he was assigned to the Lakewood roster, posting a .423 average in 19 May games.

In 109 regular season games with Lakewood, Singleton posted a .290 batting average with 14 homeruns and 77 RBI with 9 stolen bases.

The steals production could hit the double digit range as he moves up the ranks, but Singleton's speed is not one of his best assets.

Singleton has a significantly more thorough approach at the plate than most players his age. He trusts his hands and recognizes off-speed pitches, enabling him to pull breaking pitches and drive fastballs to all fields. In addition, Singleton's discipline at the plate keeps his walk-to-strikeout ratio (62-to-74, in 2010) at a good level for a power hitter. As Singleton matures and develops more physical strength, his power should increase as well.

Singleton was a first baseman until instructional league ball that followed the 2010 postseason, where he was given a trial in left field. Singleton will continue to play left field going forward this year. The 6'2", 220-pound Singleton is certainly athletic enough to make the transition to the outfield. He has solid instincts and should be able to display enough range to make folks wonder why he wasn't in the outfield to begin with.

Speaking about Singleton's move to the outfield, earlier this month, Phillies General Manager Ruben Amaro Jr. stated, "If (Singleton) can do it and continues to hit, then he'll be a left fielder (from now on). It looked like he took to it fairly well at the instructional league. He seems excited to do it. I think he knows there's a very big first baseman sitting out there in the Major Leagues that's not going anywhere. He has a very good bat and he has a chance to be a big leaguer."

Singleton garnered a ton of recognition with his 2010 campaign. Honors included being named the Phillies' top prospect by multiple outlets, being named to the full season SAL All-star team and being declared as the league's most outstanding prospect by the South Atlantic League.

"The Boss" even impressed "The Big Piece" when he had the opportunity. In August, Phillies first baseman Ryan Howard made a one-game rehab appearance in Lakewood, while recovering from an ankle injury. Howard spent time with Singleton talking about life and baseball, during batting practice. Howard then watched Singleton closely during the game and was thrilled with the youngster's swing and his approach, especially at the age of 18.

Moving forward, expect to see Singleton, who turned 19 years old the same day that the BlueClaws clinched the Sally League title in September, as a member of the High A level Clearwater Threshers in 2011.

Everyone within the Phillies' organization is excited about the type of ceiling the young slugger Singleton has. However, with the exception of outfielder Domonic Brown, the Phillies' new approach to baseball seems to be dealing away their top prospects for proven big league talent, as is evidenced by the organization parting ways with the likes of Kyle Drabek, Michael Taylor, Travis d'Arnaud, Carlos Carrasco, Anthony Gose and others.

With the type of potential that Singleton possesses, it seems to be quite likely that he'll play in the Majors some day. However, I would be somewhat surprised if "The Boss" makes it happen in red pinstripes.