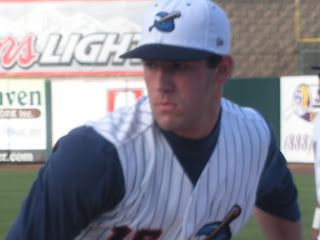 A 7th round draft selection in 2009 out of St. Thomas More High School, in Louisiana, Brody Colvin was originally committed to attend Louisiana State University, but signed with the Phillies at the deadline.

The right-handed Colvin made his professional debut late in 2009, throwing 2 innings in a game for the Gulf Coast League Phillies. He then followed up his brief stint in the GCL by pitching at instructional ball for a month following the season.

In 2010, Colvin spent the year as a member of the Class A Lakewood BlueClaws' starting rotation. Colvin began the season poorly in the South Atlantic League, as he sported 2-5 record with an 8.40 ERA after a start against at Greenville on May 12th, in which he failed to go 2 full innings. After that rough start, however, Colvin proceeded to rattle off an amazing string of 13 starts in which he posted a 3-1 record, a 1.38 ERA and 68 strike outs in 78 innings.

Colvin's overall regular season ERA of 3.39 in 27 starts was very strong, especially considering he struggled early in the season and had an 11.15 ERA through his 4 April starts.

His 6-8 regular season record with the BlueClaws doesn't quite show it, but Colvin proved to be one of the premiere pitchers in the SAL once he straightened himself out. He allowed 0 or 1 runs in 11 different starts in which he did not earn a win during the 2010 season, so it's clear that Colvin wasn't blessed with much offensive support at times.

By mid-season, the Phillies had placed an inning limit of 5 per outing on Colvin, in order to keep his innings total for the season down. This preventive measure was perhaps sparked by injuries to Colvin's staff mates, Jarred Cosart and Nick Hernandez.

Throughout the second half of the season, Colvin worked on his mechanics with Lakewood pitching coach Steve Schrenk. Adjustments made to Colvin's delivery reduced his tendencies to throw across his body and enabled him to add some velocity to his fastball. Colvin's performances in 2010 showed an improved efficiency as he worked hard to develop his pitches and his delivery.

Colvin's pitch repertoire features a fastball that reached 96 MPH steadily by season's end in 2010, a circle change up and a curveball with good 12-to-6 movement.

Control is another strength for Colvin, who averaged just 2.4 walks per 9 innings after his bumpy April.

At 6-feet-4-inches tall and weighing about 200 pounds, Colvin has an ideal size for a pitcher. With all the tools and the physical presence there, Colvin's biggest improvements will be made between his ears. Small mental lapses were what troubled him early in the 2010 season and the cranial slacking made a return in a late August start, where Colvin neglected to back up third base on a lead-off triple in the 5th inning by an Augusta batter. The mental mistake got Colvin removed from the game immediately and cost Colvin his assignment as the team's number 1 starter going into the postseason. The duty was then given to teammate Trevor May.

Headed into the 2011 season, Brody Colvin is expected to be a part of the High A Clearwater roster along side many of his 2010 SAL Champion Lakewood teammates, where they could likely contend for the North Division title. The time table for his ascension to higher levels is not clear. However, an estimated time of arrival in the Majors of 2014 sounds fair for a hurler with the make up that Colvin possesses.