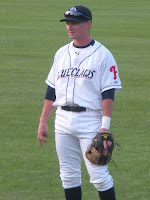 Keeping the rust off during the off-season is a struggle for some players. Phillies infield prospect Alan Schoenberger didn't have that problem. The switch-hitting Schoenberger spent his North American off-season in the Summer heat, down under, playing in the inaugural season of the new Australian Baseball League.

Schoenberger, who is 22 years old, returned home to his native Queensland to take part in the Australian Baseball League as a member of the Brisbane Bandits. The ABL had previous incarnations that failed. The current version debuted in 2010 as a new entity that is jointly owned by Major League Baseball (75%) and the Australian Baseball Federation (25%).

Australian players all learned of the reinvention of the ABL back in June, while many were playing for their Major League affiliated clubs in the United States. Schoenberger and others were all very excited to learn about professional baseball in this capacity returning to their homeland. It gave them all something to look forward to for the off-season.

In 96 games as a member of the Class A Lakewood BlueClaws in 2010, the versatile Schoenberger, who played second base, shortstop, third base, right field and left field during the regular season, batted .253, with 5 homers and 35 RBI.

Schoenberger's season with the BlueClaws was a breakout one, as he previously had just 1 professional homerun in 270 career plate appearances over 3 years.

During his time with Brisbane, Schoenberger, who was signed by the Phillies as an amateur free agent in 2006, posted a .250 average with 3 homers and 18 RBI in 31 games played in the league that Schoenberger says is the equivalent to Class A ball in the United States.

Other Phillies minor leaguers that participated in the ABL, as members of the Bandits this season, were catcher Joel Naughton, righty pitcher Drew Naylor and 18-year-old pitcher Josh Warner.

In ABL play, Schoenberger faced off against another familiar face from the Phillies' organization, manager of the Canberra Cavalry, Steve Schrenk, who was the pitching coach for Schoenberger's club in Lakewood last season. It was Schrenk's first time working in Australia and Schoenberger took it upon himself to prepare his coach a bit for life down under. The two even enjoyed a bit of a rivalry during the season.

"I got along with (Schrenk) very well in the States. I spoke to him and his wife a little bit, over in the States, just before they came out. We chatted a bit and I told them a few things to expect in Australia. Once I got down there to play against him it was good fun because he obviously knew my strengths and weaknesses from the season in the States, so it added a little bit more to the game. We got lucky and won the series, so that was good also," Schoenberger said in an exclusive interview.

Unfortunately for Schoenberger and Schrenk, the Bandits and the Cavalry were the only two of the league's six clubs that did not qualify for the postseason.

While games in the ABL frequently draw crowds that are considerably smaller than attendance figures for minor league games in America, the fans attending ABL match ups are generally more attentive to game action than a crowd in the United States. Many Americans attending minor league contests regularly seem to be more focused on a casual family outing or perhaps are more interested in the menu on the concourse than the action on the field. Players like Schoenberger that are used to more fans don't mind smaller turnouts when a crowd 1/5 the size can produce the same level of volume.

Schoenberger cited the Bandits' opening game at home against the eventual league champion Perth as the highlight of his season, crediting the spectators in attendance with producing a level of intensity that was fun and sparked patriotism for the players.

The season wasn't all enjoyable for the players in the ABL, however. In December and January, many areas of the continent were impacted by treacherous flooding that carved a massive path of destruction throughout eastern Australia. Drenching rain rocked Schoenberger's native Queensland for weeks and left many people stranded and homeless. Others perished.

The Brisbane schedule was shortened by six games due to the impossible playing conditions in the surrounding areas. In fact, a pair of Schoenberger's teammates, Josh Roberts and Andrew Campbell, were trapped away from the team, in their home town of Ipswich, due to flash flooding. Mainly, though, the players on the Bandits were lucky enough to not be personally effected by the terrible disaster.

"It was just a very eerie feeling (to see the devastation). Especially just having a look around at certain areas that we usually go to. Just to see it so close really made more of an impact," Schoenberger stated.

The Bandits managed to play 34 of their 40 scheduled games by organizing double headers in the latter weekends of the season.

Despite the difficult times, however, Schoenberger feels the competitiveness in the ABL helped him improve and stay ready for pro ball in America, where he will continue to take steps toward his ultimate goal of reaching the Major Leagues.

"The league was really competitive," Schoenberger said. "We've got really good pitching. It's not a league you can just walk straight into it, and be a bit out of shape and hit. You've got to stay on your game. I'll be reporting to spring training for physicals on March 1st and I'll be ready to go."