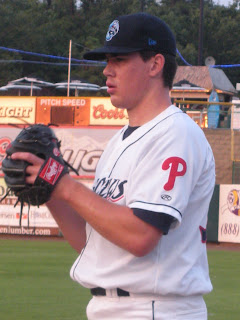 Washington state native Trevor May appeared to be on an extremely fast track to the big leagues after two season in the Phillies' system. However, a rough patch in High A ball followed by a demotion seemed to bring May back down to Earth a bit and served as somewhat of a reality check. Now, following improvements in the second half of his 2010 season, May seems to be back on the rise.

A 4th round draft choice in 2008 out of Kelso High School, May has won minor league championships in each of his three seasons as a pro in the Phillies system.

After signing with Philadelphia, May helped lead the rookie level Gulf Coast League Phillies to their league title in 2008. In 5 regular season games in the GCL, May went 1-1 and had a 3.75 ERA.

The right-handed May began the 2009 season in extended spring training then later was assigned to Class A Lakewood and swiftly became one of the Phillies top rated pitching prospects by blazing through opposing batters with a 4-1 record and a 2.56 ERA in 15 starts. May also struck out 95 batters in 77 1/3 innings pitched en route to the BlueClaws' South Atlantic League title.

May began his 2010 campaign with High A level Clearwater, but struggled with his grip in Florida's humidity and had great difficulty throwing strikes, which resulted in an uncharacteristically high 61 walked batters in 70 innings. Overall with Clearwater, May posted a 5-5 record with a 5.01 ERA in 16 games, 14 of which were starts.

Phillies assistant general manager in charge of player development Chuck LaMar chose to return May to Lakewood, where he quickly bounced back and received a boost in his confidence, returning to excellent form. In 11 regular season games, May went 7-3 with a 2.91 ERA. On July 27th at Delmarva he struck out 14 batters to tie a team record for strike outs in a game.

May again helped lock down a Sally League title for the BlueClaws. In the 2010 postseason May was strong, whiffing 13 and walking 1 in 6 2/3 shutout innings against the Hickory Crawdads in the opening round to earn a win. In Game 1 of the championship round against the Greenville Drive, May gave up a run and struck out 8 over 5 innings and took a loss. The BlueClaws locked down the SAL title before May was needed in game 5.

Combined in two postseasons with Lakewood, May, who stands 6-feet-5-inches tall and is listed at 215 pounds but likely weighs more, allowed just 1 run in 22 2/3 innings.

The 21-year-old's pitch repertoire consists of a heavy fastball that steadily reaches the mid-90's, a sharp curveball and a change up that has come along nicely since May began throwing it in 2009. Considered a power pitcher at times, May has tried to work some finesse into his game with placement and by using each pitch in any given count. Despite that though, his strike out rates have stayed high throughout his three pro seasons, as May has averaged 11.55 strike outs per 9 innings in his minor league career, and he averaged 12.13 strike outs per 9 innings in 2010.

The Phillies could wish to take their time moving May upward in the system, but it will ultimately depend on May's drive. If May continues to mature and learns to cope with the varying climates he'll have to deal with at higher levels, he could be in consideration to break into the big leagues in a couple years.