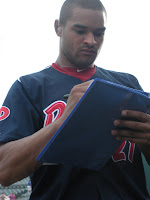 Tyson Gillies is the third of the three players acquired from Seattle in December 2009, in the trade for Cliff Lee, to appear on this countdown. Gillies struggled with leg injuries during his 2010 season while with the Double A Reading Phillies, but still projects to be a solid contributor at higher levels.

Gillies, a lefty batter that primarily plays center field but has played all three outfield positions in his professional career, had multiple stints on the disabled list due to a recurring left hamstring ailment in his first season in the Phillies organization. The injury limited Gillies to just 28 games played in 2010, an issue that Gillies somewhat blamed himself for, as he felt he came back too soon from the hamstring ailment, which caused him to aggravate it a second and third time.

A ground ball/line drive hitter that is known for using his speed to help him reach base, Gillies is also pretty well known for his hearing impairment. Diagnosed at an early age with significant hearing problems, Gillies grew up using hearing aids and has become accustomed to playing baseball with a slight disadvantage. At times, outfielders could rely on the sound of the crack of the bat to judge the distance of a ball, but Gillies makes up for that with his quickness and great range on defense. Gillies says for him, it's just natural.

Growing up in British Columbia, Gillies played both hockey and baseball. However, when he reached his teenage years, Gillies felt that it was best to choose one sport to focus on and, as determined by his size at the time, he selected baseball. As he progressed as a player, his love and passion for the game of baseball developed along with his talents and he has never looked back.

A 25th round selection in the 2006 amateur draft, Gillies has been compared to Curtis Granderson and Shane Victorino at times. With a bigger frame than both of those players, one wonders if the 6'2", 195-pound Gillies could develop into an offensive threat that could surpass each of those men. That's certainly a tall task, but not impossible if the 22-year-old can stay healthy and continue to mature on the field. On the low side, perhaps Dave Roberts is a more reachable type of level for Gillies.

Gillies began his pro career in 2007, as a member of the Arizona League Mariners and later with Everett of the Low A Northwest League. Combined at both levels, he batted .255 with 11 steals and a .688 OPS in 39 games.

He followed that up with an improved 2008, where he spent time with Everett before earning a promotion to High Class A High Desert. In 72 combined games, Gillies' production shot upward as he batted .302 with 25 steals and an .831 OPS.

In a 2009 return campaign with High Desert, Gillies became a highly regarded prospect, as his offensive output excelled even more. Gillies posted a .341 batting average, good enough for third highest in the minors, with 44 steals and a .916 OPS in 124 games.

What seemed to improve the most over Gillies' first few seasons in the minors was his ability to get on base. His solid eye at the plate saw his on-base percentage rise in each of his initial three seasons in the pros, with marks of .358, .421 and .430.

Following the trade to the Phillies, Gillies played in 26 games with Reading and 2 rehab games with the Gulf Coast League Phillies in 2010. During his injury shortened season, Gillies batted .243 with 2 homers, 7 RBI and 2 stolen bases.

The summary for Gillies is that he's got all the right tools to, someday, reach the Major Leagues. He has exceptional speed, has shown progression at the plate and has solid instincts with a strong throwing arm on defense. This year, Gillies should return to Double A for a full season. Provided he can continue to progress, Gillies could see an estimated time of arrival in the Majors of 2013.

jroo said…
What ever happened to the cocaine possession charges?
February 9, 2011 at 9:44 PM

The charges were dropped for lack of evidence. He was never indicted.

Since the charges were dropped and the arrest didn't cause Tyson to miss any time from his team during the year, I didn't address the issue.