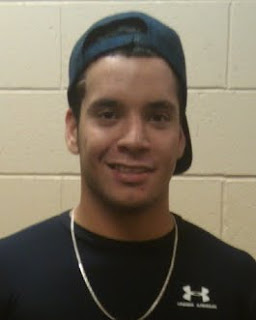 Mexico native Sebastian Valle has emerged as a premiere prospect in the Phillies organization. Valle is a promising young catcher who was signed by the Phillies as an amateur free agent in 2006 at the age of 16.

The right-handed hitting Valle began playing professional ball in the Dominican Summer League in 2007. While there, he batted .284 with an OPS of .802 in 54 games.

In 2008, Valle played for the Gulf Coast League Phillies, where he batted .281, hit 2 homers and drove in 18 runs in 48 games. There, he helped guide the GCL Phils' pitching staff to a league championship.

The following year, Valle, who stands 6-feet-1-inches tall and weighs around 175 pounds, split time between Class A Lakewood and Low A short season Williamsport. In 50 games for the Williamsport Crosscutters, Valle shined, posting a .307 average with 6 homeruns and 40 RBI. Valle's .866 OPS with the Cutters was impressive as well. The production wasn't quite the same with the Lakewood BlueClaws, however, as Valle struggled for playing time behind eventual Roy Halladay trade chip Travis d'Arnaud. In 45 games for the eventual SAL champion BlueClaws, Valle batted .223 with 1 HR, 15 RBI and a .644 OPS.

The 2010 season presented a chance to play more for Lakewood and Valle, who entered the season at 19 years of age, produced very solid numbers, as one of the leaders of the team's offense. Valle began the year a bit slow, notching just a single homerun in his first 40 games. Once he heated up, though, Valle hit 8 homers over the next 18 games and kept it going for the remainder of the year. In 117 regular season games, Valle posted a .255 batting average, mashed a team leading 16 homers and knocked in 74 runs to help his club lock down a second consecutive South Atlantic League title.

Valle spent his off-season playing for his hometown Los Mochis Caneros in the Mexican Winter League. In order to save his knees for his more important gig in the Phillies system, Valle spent some time playing the outfield. Coming up as a youth player, Valle also played third base and pitched.

The now 20-year-old Valle saw a dip in batting average this past year, as he worked closely with his hitting coach Greg Legg on hitting pitches the other way. Despite his generally fluid swing, Valle adjusted his approach at times. He saw his best success when he kept things simple by keeping his front shoulder down and his head on the ball. As the season went on and Valle ironed out the things he was working to improve, along with Legg and his manager Mark Parent, his production became more reliable.

With a low walk rate of 5.6% in 2010, Valle will need to focus on being less aggressive at the plate and taking more pitches in order to become a more complete offensive threat.

Defensively, Valle is developing at a steady rate and was a clear leader for the strong BlueClaws pitching staff that impressed so many scouts, media members and executives last season. Lakewood pitchers repeatedly credited Valle, during the 2010 season, with helping them excel. His terrific rapport with his hurlers and knowledge of each pitchers' strengths enabled him to direct the outstanding group of young fireballers toward a championship.

Look for Valle to climb the minor league ladder aside his army of well regarded hurlers that include Trevor May, Jarred Cosart, Brody Colvin and Jonathan Pettibone. Each of those men are expected to begin the 2011 season in High A Level Clearwater, where they'll very likely take the Florida State League by storm and contend for another postseason crown.

In the long term, Valle projects to be a Major League catcher and has the power potential to become a highly sought after prospect in the meantime.

This piece was also featured on PhilliesNation.com.