By Jay Floyd February 25, 2011
On Thursday, the Phillies opened their exhibition schedule as they do every year with a match up against the Florida State Seminoles. The ACC's top squad wasn't quite a tough challenge for the defending NL East division champions, as the Phillies won by a decisive score of 8-0.

Not surprisingly, the Phillies took control early against hurler Tyler Everett when they jumped on the youngster for four runs in the first inning. The key blow in that frame was a two-run double by Ryan Howard. 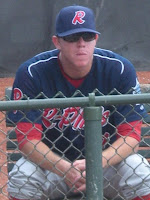 Following the win and retiring all three batters he faced, De Fratus was excited. The California native, who is enjoying his first full big league spring camp, stated, "It was good to get my feet wet in a nice, laid back environment today and get the first outing jitters out of the way, before I face the Yankees on Sunday."

Mathieson, who struck out two and walked one of the five batters he faced, felt like this game was more than just a relaxed tune up against a college team. For a guy like Mathieson, who is trying to make his way back to the Majors after three elbow surgeries, each of these outings is extremely important.

"Every game for me this spring is a chance to try to prove to the brass and the people making decisions that I'm good enough and I can compete and I can help the team out this year," Mathieson stated.

The right-handed Mathieson utilized his new split-finger fastball, that he learned from Bruce Sutter, to his own satisfaction, mixing it in 7 or 8 times during his inning of work.

After taking strides to improve his pitch repertoire, which also includes a change up and a slider that may be phased out depending on the success of the splitter, Mathieson feels the augmentation to his arsenal of weapons will be key for him to make an impact with the big club this season.

"I just want to get the opportunity to pitch and, for me, it's a chance to show that my off-speed stuff, which has always been a question, is good enough to pitch at the Major League level. That's my goal to do that all throughout camp and I feel that if I can do that, I'll hopefully land a spot on the team."