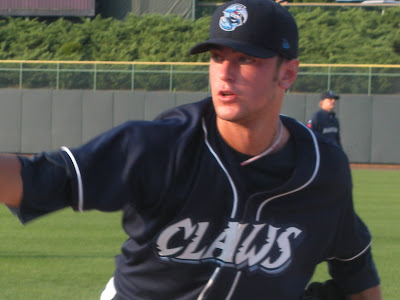 Righty hurler Jarred Cosart was selected in the 38th round by the Phillies in the 2008 amateur draft. Cosart, who turned 20 years old during the 2010 season, has been extremely impressive since joining the Phillies organization, despite some physical hindrances.

Cosart's draft position is quite deceiving. He was projected as an early round talent, but the Texas native's firm commitment to attend the University of Missouri had Major League teams avoiding him throughout the selection process. The Phillies took a gamble later in the draft, then followed Cosart, who played outfield and pitched as an amateur, around as he played rec league baseball during the Summer months. At the signing deadline, the Phillies made a hefty $550,000 offer, that both sides view as an investment, and coaxed Cosart to sign a contract.

The following season, Cosart was in the midst of a tremendous campaign with Class A Lakewood that had him shooting up in the rankings of Phillies prospects, when his season was cut short. This time it was due to an elbow injury. In a late June road start at Delmarva, Cosart went just 2/3 of an inning when he had a rough opening frame and felt some elbow discomfort. After that, Cosart visited Phillies doctors in Philadelphia and was shut down. Cosart later visited with renowned surgeon Dr. James Andrews for a diagnosis and surgery was not required.

Given the honor of appearing in the MLB Futures Game, which takes place as part of the annual Major League All-star activities, Cosart was unable to attend, due to his ailing elbow.

The pitching repertoire at Cosart's disposal includes a sharp fastball with movement that ranged from 96-98 MPH during the 2010 season, a curveball that Cosart considers his out pitch and a change up that he has been working to improve. Along with refining his pitches, Cosart was open this year about developing his intelligence on the mound. He worked closely with Lakewood pitching coach Steve Schrenk, on his own off days, to learn hitters' tendencies and become more of an analyst on the mound.

A power pitcher in the making, Cosart has averaged 9.6 strike outs per 9 innings in his 21 professional outings to date.

Cosart's work ethic and focus on the future is remarkable. Initially disappointed that the Phillies wished to shut him down last year, due to his elbow issues, Cosart began to appreciate the thought process behind the decision and was eventually pleased that the organization and its doctors chose to be so cautious. He worked hard to complete his rehab work with trainers in Clearwater and was able to rejoin the BlueClaws for their championship series clincher at home, prior to pitching at instructional ball following the postseason.

In December, Cosart said of his time at instructional ball, "There were absolutely no setbacks in instructional league, just a little bit of rust having not thrown to live competition for a few months. The arm felt great, though. And overall, the coaches were very pleased with my outings and, obviously, that the arm felt good."

Cosart has since followed up a restful off-season by reporting to Spring training roughly four weeks early in order to get in the best possible shape for the upcoming season.

Although he is expected to begin the year on the class High A Clearwater Threshers roster, Cosart has no preference for which level the Phillies may decide he is best suited. He simply wants to make progress by staying injury free, in 2011. As he ascends toward the big leagues, it will be up to Cosart and his body to determine a potential arrival date on the Phillies' roster.