By Jay Floyd September 17, 2010
Poor weather washed out the return of the South Atlantic League Championship Series to Lakewood. With more precipitation on the way, game 3 was postponed Thursday night when heavy rains left the FirstEnergy Park field too wet to play on. The best-of-five series between the Phillies' Class A affiliate the Lakewood BlueClaws and the Red Sox affiliate Greenville Drive is tied at 1 game apiece. Last season Lakewood defeated Greenville in 4 games to win the SAL championship.

The rescheduled time for game 3 is Friday at 7:05pm, with game 4, which was originally slated for Friday evening, being pushed back to Saturday at 4:05pm. A deciding game 5, if necessary, will be played 30 minutes following the finish of game 4.

Normally, minor league double header games are regulated to 7 innings. However, with the league championship on the line, both games on Saturday will be scheduled for 9 innings.

Six suspensions were handed down by South Atlantic League president Eric Krupa, following a bench clearing scuffle that took place during game 2 of the League Championship Series on Tuesday night in Greenville. 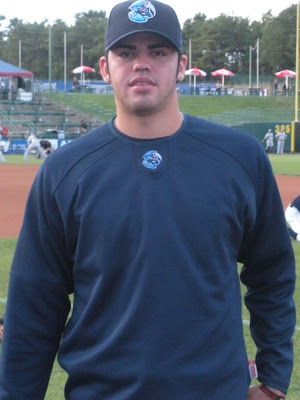 In the 5th inning of game 2, Greenville's Derrick Gibson was gunned out at home plate by Leandro Castro while trying to score on a single. Gibson attempted to bowl over Lakewood catcher Sebastian Valle in an effort to knock the ball loose. Valle held on and spiked the ball. Gibson expressed his displeasure for the gesture, and Lakewood pitcher Julio Rodriguez made his point of view known, as Gibson's move resembled a cheap shot. Gibson and Rodriguez exchanged words, then got physical before both teams stormed the field. 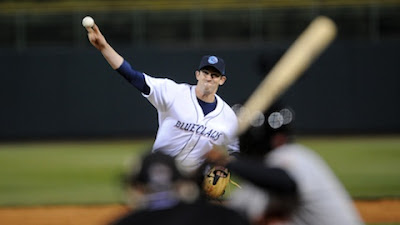 Josh Zeid, who pitched great in relief following Julio Rodriguez's ejection from game 2 with 3 hitless innings, has gone from Lakewood's closer in April, to the BlueClaws' 5th starter through the middle of the season and now seems to be the team's featured reliever.

Zeid, who won Phillies minor league pitcher of the month honors in April when he posted a 2-0 record with 3 saves, a 0.00 ERA and a .096 batting average against, has contributed in multiple roles to the team's championship repeat chase this year. The variance in duties hasn't discouraged Zeid, even though he admits the switches have not been ideal. "It's tough to adjust, when you don't know what you're doing each week. The change of routines is tough, but I've always said that I'll pitch whenever they want me to and I'll have fun doing it," Zeid stated in an exclusive interview with PhoulBallz.com.

The 23-year-old righty hurler, Zeid, feels like he has put his mark on the story of the 2010 BlueClaws, but knows his job isn't finished. "We're not done yet. There are still two more games to win. I've had a great year and a bunch of other guys have too. We've all worked hard and deserve to win (the SAL championship)."