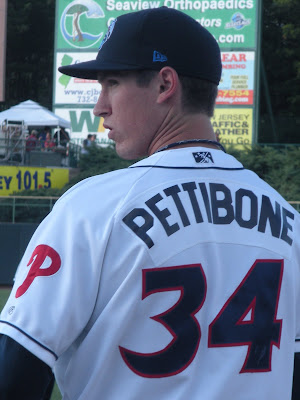 From the start, Pettibone's command was on point and his fastball was a notch faster than normal, coming in at 94 MPH on the FirstEnergy Park radar gun. Pettibone's battery mate Sebastian Valle fed off the energy from his pitcher and slammed a 2-run homerun in the bottom of the 1st inning that scored Michael Dabbs, who singled. Jeremy Barnes also drove in a run in the 1st, when he slapped a single that plated Leandro Castro.

Pettibone held opposing batters to just 1 hit while striking out a career high 9 batters over 7 innings, leading the defending league champs to a 6-0 victory and clinching a return to the finals.

"The early run support definitely helped my confidence," Pettibone said after the game. "I just tried to go out there and pitch the best I could to give the team a chance to win. I knew they were going to score runs for me. We got shut down (in game 2) and that's not like us."

Pettibone rode a no-hitter into the 6th inning, where he surrendered the Crawdads' first hit to Travis Adair, with 2 outs.

"Pettibone set the tone right away. He was just outstanding in every sense," Lakewood manager Mark Parent stated. "He had ice water in his veins and he did exactly what he has done for (us lately)."

Pettibone's ERA over his last 9 starts is a sparkling 1.82.

The BlueClaws tacked on some insurance in the 7th inning, when Keoni Ruth reached on an error by Hickory third baseman Matt West. Alan Schoenberger then stroked a double on an 0-2 pitch that was barely fair, down the left field line. Ruth displayed great speed to score from first base on the play.

"I got the pitch away with runners on and I had been struggling to gets hits with runners in scoring position so it was nice to contribute tonight in the win," Schoenberger said. "Parent had actually called for a bunt on the first two (pitches), and I wasn't unable to get that down. I got an 0-2 change up that I got out in front of and just hit it hard enough to get it past the third baseman and keep it fair."

Also in the 7th, Dabbs plated Schoenberger with a sacrifice fly.

Hickory played poorly in the field, committing 5 defensive miscues in a game where there was no margin for error. Three of the BlueClaws' six runs were unearned.

Right-hander Luke Wertz threw the 8th and 9th innings for the BlueClaws to complete the 2-hit shut out.

Lakewood will travel to Greenville (Red Sox affiliate) to play the first two games of the championship round on Monday and Tuesday. Lakewood will host games 3, 4 and 5 on Thursday, Friday and Saturday, if necessary.

Pettibone expressed belief in his team's chances in the championship series. "We're all fired up and ready. We can beat Greenville. We beat them before." Lakewood would become the first repeat SAL champions since Savannah did it in 1993-1994.