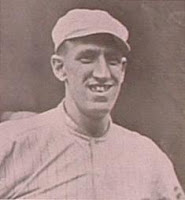 Al Demaree was a right-handed pitcher with the Phillies from 1915-1916. His time with the Phillies was brief, but he helped snag the club's very first National League pennant. Demaree debuted as a rookie with the New York Giants in 1912 and played two more full seasons with the Giants, posting a 24-21 record in that time.

Following the 1914 season, Phils manager Pat Moran vowed to make changes and Demaree was among a group of three players that Philadelphia acquired for third baseman Hans Lobert.

Demaree made a fast impact in 1915 when he shut out his former team 3-0 in his Phillies debut. However, Demaree left people doubting the trade when he strung together 6 losses in his next 6 starts. The poor stretch resulted in Demaree being pulled from the starting rotation. By early July, he got another shot at starting and again shut down the Giants, this time 1-0. Demaree won 5 of his next 6 starts. In mid-August, he would throw his 3rd shutout of the season against Boston.

Demaree ended the 1915 regular season with a 14-11 record and a 3.05 ERA, but did not pitch in the World Series for the Phillies against the Red Sox.

1916 would be the best season of Demaree's career as he posted a 19-11 record and a 2.62 ERA in 39 games (35 starts). He continued to perform extremely well against his former team, as he won his first 2 starts of the season against the Giants and 6 of 8 starts overall against them that season.

On September 20, 1916, Demaree pitched both games of a double header against Pittsburgh, winning 7-0 and 3-2. The Phillies would finish in second place that year, 2 1/2 games behind the Dodgers.

In April 1917, Demaree was traded to the Cubs for pitcher Jimmy Lavendar and cash. It is possible the Phillies sensed that Demaree's best days on the mound were behind him as he posted just a 23-26 record in his remaining 3 years in the Major Leagues.