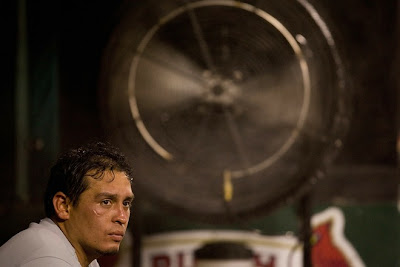 Carlos Ruiz has been hot for the Phillies
In seasons past, the role of the catcher on the Phillies club has been to guide the pitching staff, lead the team on the defensive side of things and simply contribute a bit on offense. The same does not apply this season.

Some of the increased production could be attributed to the injuries the team has suffered this year, which has resulted in Carlos Ruiz and Brian Schneider batting 7th in the batting order instead of 8th, where the catcher regularly batted in recent years. Other credit can simply go to the catchers themselves, mainly Carlos Ruiz, who has stepped it up to raise his batting average and on-base percentage.

Carlos Ruiz's previous full-season high in batting average was .259. He has posted a .296 average thus far this season. His .837 OPS (on-base % plus slugging %) this season is also by far the highest of his career. In addition, Ruiz's 37 RBI since the All-star break are a career high in any half of his career with more than a week left to play.

To check out my exclusive interview with Ruiz from earlier this season, click HERE.