By Jay Floyd September 08, 2010
By now you have heard that the Phillies are back in first place, atop the National League East standings. There's a long road ahead for the big club, with 22 regular season games remaining, as the Phils try to reach the post-season for the fourth straight year. However, the A Level Lakewood BlueClaws begin their quest to repeat as South Atlantic League Champions tonight, as the playoffs get underway in Hickory, North Carolina. 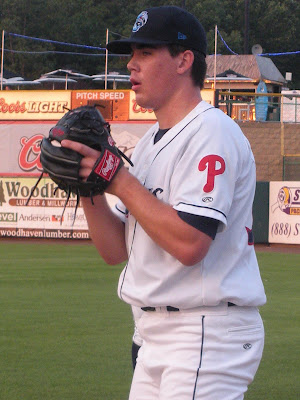 Trevor May, a right-handed pitcher who was recently ranked as the #4 prospect in the Phillies organization in a poll done by The Reading Eagle, was a member of the BlueClaws championship roster last year. May is slated to be the BlueClaws' game 1 starter, as they face the Rangers Class A affiliate, the Hickory Crawdads.

May, who was also on the Gulf Coast League Phillies roster that won the GCL title in 2008, recently spoke about the team's playoff push. "As of late, we've been playing really well, trying to go into the playoffs running. I've had a ring every year I've been in the minors and if I had another one, it would be great!" 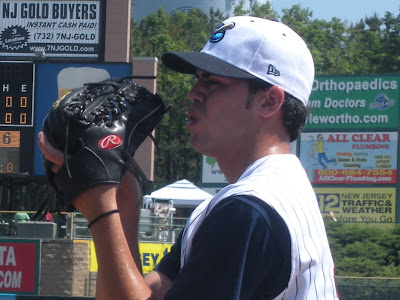 Julio Rodriguez, who was named Phillies minor league pitcher of the month for August, is not scheduled to start for the BlueClaws in the first round of the playoffs. In 6 August games with Lakewood, 2 of which were starts, Rodriguez posted a 1-1 record with a 1.17 ERA while striking out 38 batters in 23 innings pitched.

Manager Mark Parent loves having the 20-year-old Rodriguez at his disposal in case one of his starting pitchers isn't effective or becomes injured. "(Rodriguez) has done nothing but impress us. Anything he does...starting, long relief- he's done very well. I'm impressed with him," Parent said of the Phillies' 8th round draft pick from 2008. 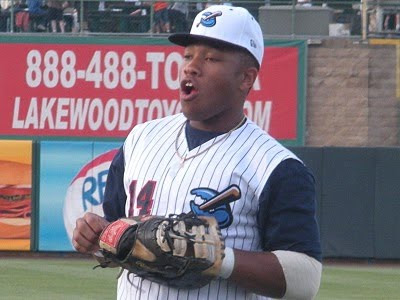 Top prospect Jonathan Singleton, who turns 19-years-old the day that the deciding game 5 of the championship series (if necessary) is scheduled, on Saturday the 18th, is ready to help his team in the 'Sally' post-season. "I've never won a championship and this is my first chance. I'm excited and I'm ready to play," Singleton stated. "(Our confidence level is) very high. We've won a lot of games, so we know what we're capable of. We just have to go out there and play our game."

Singleton, a left-handed hitting first baseman, posted a .290 batting average with 14 homeruns and 77 RBI in 104 games this season with the BlueClaws.

Lakewood finished both halves of the 2010 season as the top team in the SAL Northern Division, and became the first team since Capital City in 2004 to win its division in both halves of the season. A repeat for the 'Claws would clinch their 3rd SAL title in 10 seasons of existence and would mark the first back-to-back league champions since Savannah won in 1993 and 1994.

Phans can listen to all BlueClaws playoff games online on ShoreSportsNetwork.com. Tickets are also still available to catch the home games in person at FirstEnergy Park. Click here for ticket information.