The Hunt for the Other Triple Crown

By Jay Floyd September 15, 2010
Much has been made of the triple crown chase in the National League this season. Such a feat means a batter would lead his league in batting average, HR and RBI in the same year. No National League player has accomplished this since 1937.

While Carlos Gonzalez, Joey Votto and Albert Pujols chasing such an accomplishment is surely an intriguing story, the offensive triple crown is not the only rare tri-fold achievement. How about the other one? 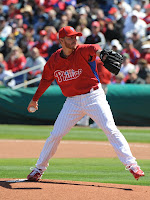 Roy Halladay is chasing the pitching triple crown in the National League, which would include leading the Senior Circuit in wins, ERA and strike outs. Currently tied for the league lead in wins with Colorado's Ubaldo Jimanez and St. Louis' Adam Wainwright, at 18, Halladay ranks third in ERA and second in strike outs.

Halladay's 2.44 ERA places him behind just the Padres' Mat Latos' 2.43 and the Marlins' Josh Johnson's 2.30. Florida's ace, Johnson, has been shut down for the season after he experienced recurring back pain, so his mark stands as the one to beat, as he started 28 games and threw 183 2/3 innings this season and will qualify as the leader in that category.

Currently tied for second in the league in strike outs at 201, with teammate Cole Hamels and the Dodgers' Clayton Kershaw, Halladay ranks behind just one NL pitcher...San Francisco's Tim Lincecum, who currently has 208 strike outs this season.

Wainwright is also in contention to rock three crowns this year, as he is tied atop the wins list, is ranked fourth in ERA at 2.50 and is fifth in the league in strike outs with 199.

Less rare than the offensive triple crown, which hasn't been accomplished since 1967 when Boston's Carl Yastrzemski led the American League in the big three categories, the pitching triple crown has been won eight times since the last offensive triple crown was locked down. No matter which crown is being discussed, the appeal of each is high because of its elusiveness.

There have been 35 pitching triple crown winners in the history of the American and National Leagues, while an offensive triple crown has been won 15 times.

It's not surprising that a hurler would be closing in on such an accomplishment in what has often been referred to as The Year of the Pitcher. In 2010 an unprecedented (in the long ball era) 5 no-hitters have been recorded in the Majors, including 2 perfect games...one of which was by Halladay. The last time more than 3 no-hitters were thrown in a single season was 1991 when Major League hurlers notched 7 no-hitters.

Based on the Cardinals' schedule, Wainwright should get at least 3 more starts this season, and could go 4 if he makes a start on short rest. Halladay is on pace to start 4 more games, if the Phillies need him to. Should the 3-time defending NL East champions lock down another division title with time to spare, Halladay wouldn't be needed in the final weekend of the regular season and could potentially skip the start to enjoy some extra rest prior to beginning the post-season.