By Jay Floyd September 19, 2010
LAKEWOOD, NJ- It was a historic day for the BlueClaws as they defeated the Greenville Drive in game 4 of the South Atlantic League Championship Series to lock down their second consecutive championship.

After winning the Northern Division title in the first and second halves of the season, Lakewood became the very first team in league history to win both halves and clinch the championship. The current format began with the 2000 season.

It was a clutch homerun by catcher Sebastian Valle in the 5th inning and masterful pitching from right-handed reliever Josh Zeid that led the way for the BlueClaws' victory. Valle's 3-run bomb off of Drive reliever Kendal Volz gave Lakewood a lead they would not relinquish thanks to 4 perfect innings of relief from Zeid.

"I owed it to my team. I struggled earlier in the year and I finished strong and the team battled all year, so I just really wanted to finish it for them," Zeid stated following the game. 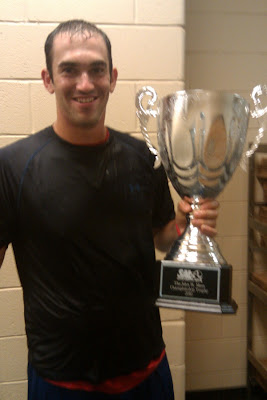 Josh Zeid with the SAL Championship Trophy
Zeid entered the game in the 6th inning, in relief of starter Jonathan Pettibone, who earned the win, with a runner on base and nobody out. Zeid quickly enduced a 6-4-3 double play and struck out Greenville's Chris Vazquez on a 96 MPH fastball to escape the inning. The next three frames went three-up-and-three-down. Zeid, who was the Phillies' minor league pitcher of the month in April when he allowed no earned runs and went 2-0 with 3 saves in 9 appearances, recorded 6 strike outs and did not allow a baserunner en route to earning the save.

The crowd at FirstEnergy Park was not at capacity, with 3,076 in attendance for game 4 at a facility that has hosted over 10,000 at a game within the past month. However, those who came out to see their home club make history were wild for every strike as Zeid brought the BlueClaws closer to another title, the team's third in its ten year history.

"The fans have been an extra man for the team all year long and their energy can really fuel the team at times," Zeid said of the home crowd.

Zeid took his time while delivering his solid effort. "I made sure I walked around the mound a little bit. I took two big breaths before every pitch. You know, you've gotta be calm, cool and collected every time. It's one of those things where if you don't throw strikes, they're going to get runners on base. You don't want the tying run at bat in a late game situation in a championship game," Zeid said.

The match up between the Boston affiliated Drive and the Phillies' Class A team, the Lakewood BlueClaws, was the first rematch in the championship series since 1964-1965, when the league was then known as the Western Carolinas League. Lakewood won last year's series in 4 games also.

Lakewood manager Mark Parent spoke about how special this season was. "What these guys gave me this year was priceless," Parent said. "There was a lot on the line this year and this was a very high maintenance team. Every day there was something going on.

"Like I said in the beginning, I really wasn't looking forward to it, till I saw the kids. And then to see them do this is unbelievable."

Greenville needed to win game 4 to force a deciding game 5 later in the evening, but it was not to be. Greenville starting pitcher Drake Britton mixed speeds well and took a 2-0 lead and a shut out into the 5th inning, but ran into some trouble after walking the lead off batter Brian Gump. Alan Schoenberger pushed Gump into scoring position with a sacrifice bunt, which led to a Keoni Ruth RBI single that cut the Drive lead in half. Jonathan Singleton knocked a single that set up Valle's deep drive onto the left field berm.