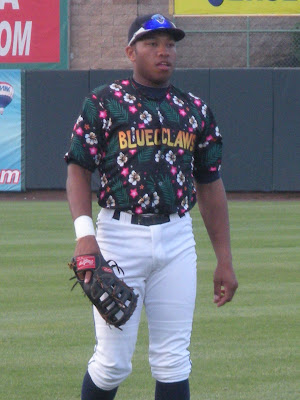 The 18 year old Singleton was drafted in the 8th round of the 2009 amateur draft and has quickly risen in the ranks of Phillies minor leaguers, as a poll that surveyed a dozen minor league experts released this week by the Reading Eagle declared Singleton the #1 prospect in the organization.

In 100 games this season for Class A Lakewood, Singleton has posted a .297 batting average, slugged 14 homeruns and driven in 77 runs.

Lakewood has clinched a playoff berth and will return to the post-season to defend its SAL title next Wednesday.

I talked with Jon about all the recent accolades and the upcoming playoffs. Check out the media player below to listen to the full exclusive interview.

Jay Floyd said…
It was Goonies night. Players and coaches alike were not fans of those jerseys.
January 7, 2011 at 11:51 PM