By Jay Floyd September 11, 2010
LAKEWOOD, NJ- With a chance to clinch a spot in the South Atlantic League finals, the Lakewood BlueClaws couldn't muster the offense it was going to take to get themselves an extra day off before travelling to the host city for the next round's opening game.

Struggling to put the ball in play when it counted against the Rangers affiliate Hickory Crawdads, the BlueClaws stranded 4 runners in scoring position, with the game tied in the 7th and 9th innings. Lakewood fell short again when they came to the plate trailing in the 10th inning and lined themselves out of a chance to tie the game or walk off with a victory.

A lead off walk for Leandro Castro and a double by Jeremy Barnes, that began the 7th inning, were wasted when Hickory reliever Miguel De Los Santos refocused and struck out the next 3 batters. This occurred in the midst of a stretch where 13 of 14 outs made by BlueClaws batters were on strike outs.

In the 9th inning Castro led off again drawing a walk. Barnes bunted him over and Stephen Batts flied out to center, allowing Castro to advance to 3rd base. Brian Gump, batting for Anthony Hewitt, walked and took 2nd base on a fielders choice defensive indifference call. Australia native Alan Schoenberger, with a chance to be the hero, then went down on strikes against reliever Joseph Ortiz.

"We just couldn't make contact when we just needed a simple fly ball or a ground ball. We weren't doing the fundamental things on offense, when there were guys in position to score runs, which is something we've been pretty good at for the most part," Lakewood manager Mark Parent said after the game.

A 10th inning run, that put the Crawdads ahead, nearly wasn't a run at all. With runners on first and third with 1 out, clean up hitter Zach Zaneski hit a slow grounder to short stop that was scooped by Schoenberger, who flipped to second baseman Keoni Ruth to get an out at second. However, Ruth was unable to complete a transfer in order to throw the ball to first base for a double play. As a result, Leury Garcia scored the go ahead run, before McGuire escaped the inning.

Garcia had reached scoring position in the 10th when he laced a base hit to center field, that should have been a single, but Jiwan James fell down while fielding the ball and Garcia was awarded a double when he hustled into second base. 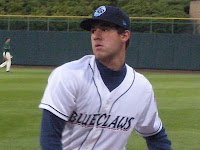 "That team pitched their (butts) off and for the most part we did too," Parent said.

Lakewood attempted to rally in the 10th inning, when Ruth slapped a 1-out double to left center. Lakewood was in an ideal spot, with their top two hitters, Jonathan Singleton and Sebastian Valle, due up. Ortiz pitched carefully to Singleton and walked him. Valle ripped the first pitch he saw to third baseman Matt West who stepped on third to get the force out on Ruth, then fired over to first base to end the game and force action on Saturday.

In the end, Hickory pulled out a 2-1 extra inning victory in front of 7,335 BlueClaws fans. Saturday's game will determine the winner of the best-of-3 series.

Hitting coach Greg Legg expressed both frustration and understanding after Lakewood's offense completed an 18 strike out exhibition. While it was tough for the veteran hitting guru to watch his players struggle, Legg knows that this is the sort of baseball people should expect in the South Atlantic League. "This is a strike out league," Legg said. "How many times did they strike out? 12 tonight, and last game they struck out 16 times. That's why these two teams are in the playoffs, 'cause they've got good pitching."

Both teams got on the board in the opening frame and the game stayed locked into overtime. Hickory left fielder Travis Addair walked to start the game and advanced on a wild pitch before he moved to third on a sacrifice. Crawdads right fielder Jared Prince plated the run by grounding out to first base. Lakewood clapped back in the bottom of the 1st when Castro drove home Ruth with an RBI ground out of his own.

Greenville, a Boston affiliate, swept Savannah in 2 games in the Southern Division series, so the BlueClaws' or Crawdads' destination is decided for the best-of-5 championship series, after a winner is determined on Saturday. Right-hander Jonathan Pettibone (8-6, 3.49 ERA) will take the mound for Lakewood against righty hurler Jake Brigham (5-5, 3.51 ERA) at 7:05pm.


Notes....
Prior to the game, the BlueClaws announced that they were extending their player development contract with the Phillies through the 2012 season. Lakewood pitching coach Steve Schrenk will spend the off-season as a manager in the Australian Baseball League. Righty prospect Jarred Cosart, who has been sidelined since late June with an elbow injury, is with the BlueClaws after spending 2 months rehabbing in Florida. Cosart, who is still on the disabled list, says his elbow is 100% and he has begun facing hitters.