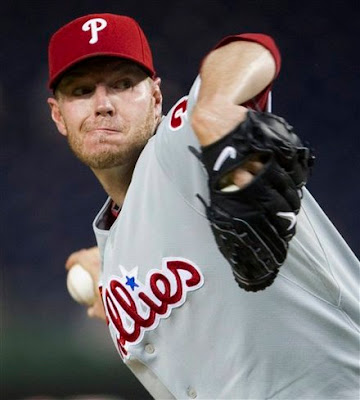 Tom Glavine, who currently works as a special assistant to Atlanta Braves president John Schuerholz and pitched 17 seasons with Atlanta during his playing career, recently spoke with Jim Bowden on MLB Network Radio.

Bowden asked the future Hall of Famer Glavine, "Game 1 of the World Series starts tonight. Tom Glavine is the general manager, he gets to pick any pitcher in baseball to pitch Game 1 tonight. Who is starting for you?"

Glavine replied, "Boy, it’d be hard to go away from (Phillies ace) Roy Halladay right now. He’s been as solid as anybody all year long and as solid as anybody for the last five years in baseball. I know there are other guys that may be a little bit more electrifying right now or maybe have a little bit better stuff than him but, I’ll tell you what, I can count on one hand, I think, the number of times it seems that he’s gone out there and not given his team a chance to win. And that’s what it’s about in the postseason."

You see, even the Braves can admit that the Phillies have the best guy in the business. Halladay ranks among the top three in each of the National League pitching triple crown categories (wins, ERA and strike outs). He has posted a 21-10 record with a 2.44 ERA and 219 strike outs in 33 starts for Philadelphia this season.

The Phillies also have a pair of other aces to help lead the way into their team record fourth consecutive post-season. Cole Hamels, the home-grown lefty, has a 12-11 record with a 3.09 ERA for the Phillies this season and Roy Oswalt, who was acquired prior to the non-waiver trading deadline from the Houston Astros, has gone 7-1 with a 1.65 ERA in 12 starts since joining the Phillies.

So, while Hallday may be the one that Glavine and others would choose to be the leader of the pitching rotation, Halladay is not only hurler that opponents will have a difficult time against.

MLB Network Radio can be found on XM channel 175 and Sirius channel 210.